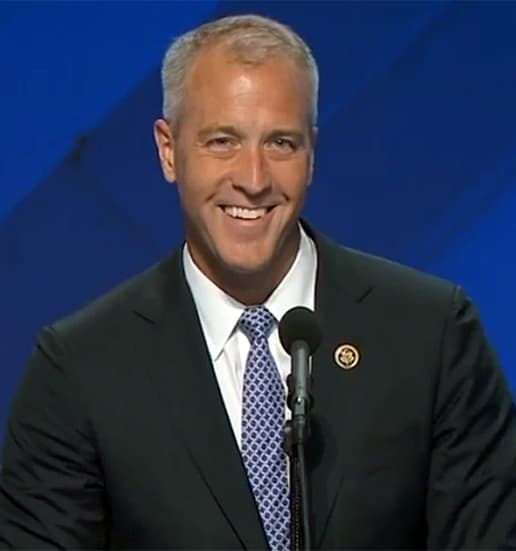 Among other people who also care about LGBT rights, Maloney added: his fellow members of the Congressional LGBT Equality Caucus care; “the authors of our nation’s Declaration of Independence, signed right here in Philadelphia, cared; Americans at Seneca Falls, Selma, and Stonewall – they cared,” he said.

“And Hillary Clinton cares, too.”

Maloney, the first openly gay New Yorker elected to Congress, marked a milestone in LGBT history in Philadelphia yesterday by introducing Sarah McBride the first transgender American to ever address a national convention of a major political party. “It’s an honor to make history with you,” he said to McBride, “because we are stronger together.”

But first, Maloney opened his speech addressing Peter Thiel’s comments. The billionaire entrepreneur and co-founder of PayPal is “proud to be gay” but doesn’t seem to care much about non-discrimination laws. During his RNC speech he mocked transgender rights calling the debate on the so-called bathroom laws a “distraction from our real problems.” (He got a standing ovation, with the GOP crowd going wild with applause, as they waved their red and blue “Families for Trump” signs.)

Maloney knows the importance of “caring” about equality. He’s been with his husband Randy Florke since 1992, when they met while waiting in line to get into The Roxy, the legendary New York City club. They got married in 2014, and have raised three kids. He is currently serving his second consecutive term in Congress, and he’s a co-chair of the LGBT Equality Caucus. Last May, his amendment to prevent federal contractors from discriminating against LGBT employees passed the House by a bipartisan vote of 223-195.

Maloney talked about the joy he felt in June of 2015, when he heard the U.S. Supreme Court’s ruling that had legalized his union: “I realized that our family, our love was no longer less than. We were now equal.”

“It’s a beautiful thing when your country catches up to you. When your basic rights and your very family are on the line, it matters what happens in those beautiful buildings with marble columns. It matters who’s leading our country. It matters if they care,” he said.

While “Donald Trump doesn’t care about some families,” he said, Hillary Clinton is the exact opposite.

“When I first met Hillary Clinton in Manchester, New Hampshire 24 years ago, I was nobody. I was some queer kid sleeping on a couch. I was scared to death that who I was meant that no one would ever care about me. [So] here was this woman, about to be First Lady. She cared. Over the last 24 years she has kept on caring about me, my husband, and our kids. Hillary Clinton cares about all of our families. And that’s why we must all care about this election.”

You can watch Maloney’s full speech below: