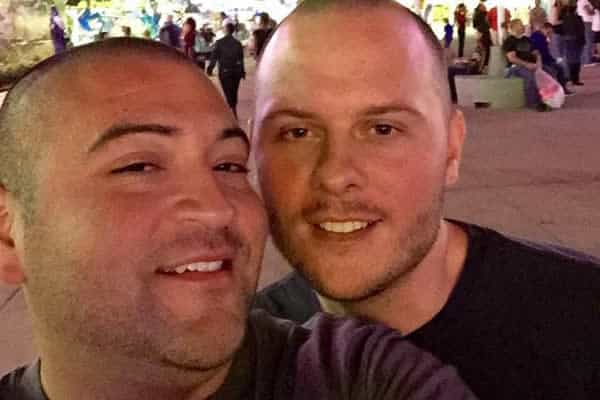 An openly gay Dallas police officer wounded in the July 7 shooting that left five of his colleagues dead faces a lengthy recovery and a 30 percent pay cut while he’s unable to work.

Jesus “Jesse” Retana (above left), a 10-year veteran of the Dallas Area Rapid Transit (DART) police, was shot in the right tricep during the ambush that followed a peaceful Black Lives Matter rally. In addition to the five who were killed, Retana was among nine officers wounded in the attack orchestrated by gunman Micah Xavier Johnson, who later died at the hands of police.

According to Retana’s husband, Andrew Moss (above right), he faces “a long road to recovery,” including surgery and physical therapy. Unlike the Dallas Police Department, DART doesn’t offset the pay reduction officers receive when they apply for workers’ compensation. To make matters worse, Retana is unsure whether all of his medical expenses will be covered.

This is not the first time Moss and Retana have faced financial hardship. Several years ago, Moss had to retire from law enforcement due to health issues, and he later spearheaded a successful effort to convince DART to begin offering same-sex benefits.

Now, Moss has launched a GoFundMe page to help the couple through another “extremely difficult” period, but thus far it has brought in only $185 in five days. Other efforts in the wake of the shooting have raised tens of thousands, which begs the question of whether people are less likely to support Moss and Retana because they’re gay.

“Thursday July 7, 2016 started out just like any other day – Jesse and I woke up and watched the news and talked before he had to go to work,” Moss wrote on the GoFundMe Page. “We ALWAYS say I LOVE YOU before we leave each other because since we both have been Police Officers at some point in our lives, we are familiar with others who have left ‘issues’ open — WE DON’T!  When I found out about this attack I was unbelievably scared but calm – I have worked with Jesse before so I knew he would do his best to make it home but I knew he would put himself between the innocent and this monster to do his best to save as many others as possible—that’s just who he is.”

The Dallas Morning News reports that DART is trying to come up with a stop-gap measure to help the agency’s officers who were injured in the shooting. In the meantime, you can assist Retana yourself by going here.