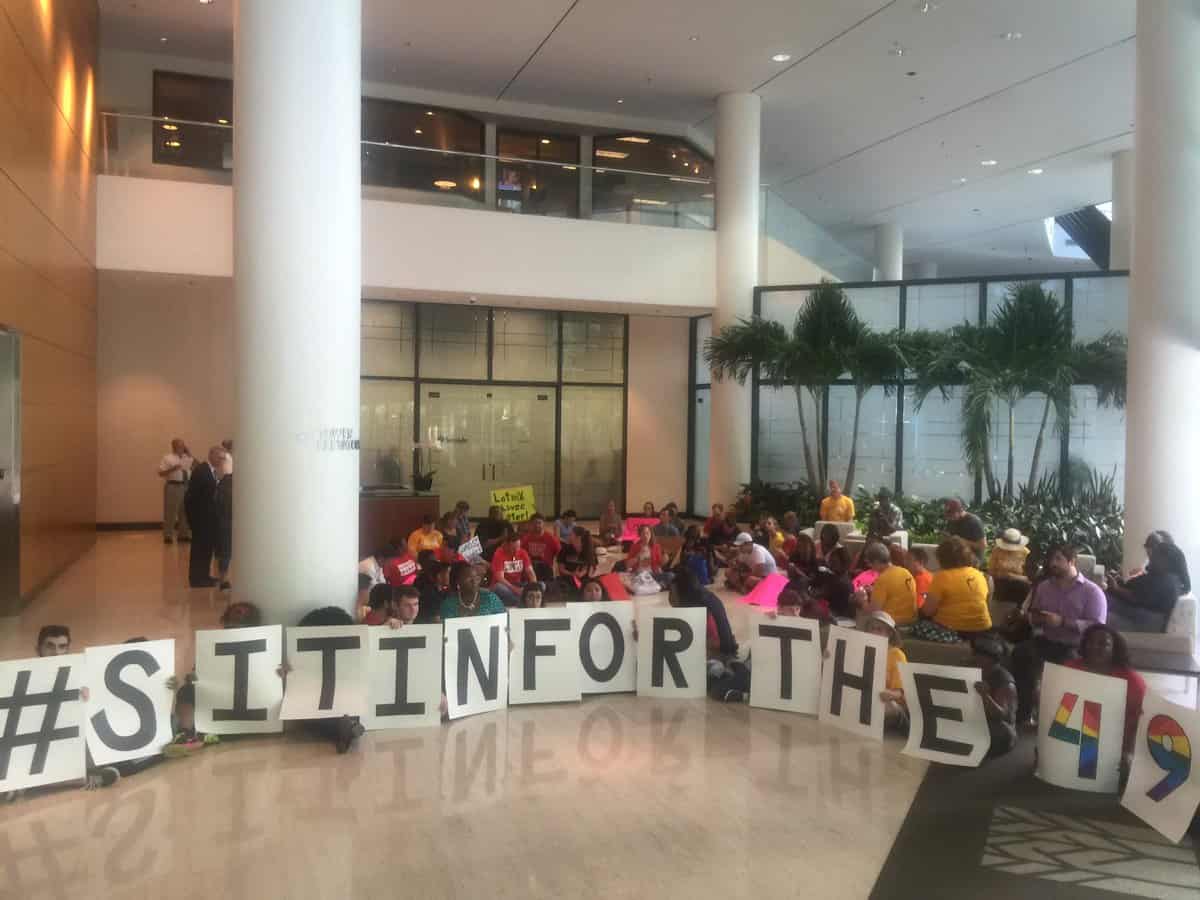 Protesters are currently staging a 49-hour sit-in outside Senator Marco Rubio’s office in Orlando, Florida, one hour for each of the victims of the Orlando massacre.

The shooting at gay nightclub Pulse took place one month ago Tuesday and was the deadliest in American history.

The assembled protesters are demanding that Rubio back gun control legislation, a national LGBT non-discrimination law, and immigration reform. Activists are using the hashtag #SitInForThe49 to draw attention to their cause.

Sen. Rubio claims he is “deeply impacted” by last month’s Pulse Nightclub Shooting, yet he continues to terrorize Orlando’s LGBTQ+ communities of color by adhering to a platform of so-called “conservative values” which discriminates, dehumanizes, and denies access to the American dream.

Opportunist political leaders have offered meaningless platitudes and political pandering in response to unspeakable violence. At best, politicians propose “No Fly No Buy” legislation that employs racial profiling and fails to address the most urgent needs of marginalized communities. We demand a comprehensive platform to address gun safety, equality, and community violence:

• Equality: LGBTQ+ people of color are more likely to be the victims of hate crimes than any other minority group. The Pulse Nightclub massacre impacted those who suffer from discrimination, poverty wages, and an unjust immigration system. We demand not only an end to hateful rhetoric and policies that perpetuate racism, sexism, homophobia, transphobia, Islamophobia, and xenophobia; but the passage of a fully-inclusive national LGBTQ+ nondiscrimination law and comprehensive immigration reform.

• Community Violence: It is time to end the senseless and systematic murder of unarmed black and brown people at the hands of law enforcement. Lawmakers must end police brutality, develop a transparent database of law enforcement activity, repeal mandatory-minimums for nonviolent drug offenses, and institute after-school programs, living-wage jobs, and accessible higher education to cultivate brighter futures in our communities.

“This is just a group of concerned citizens in Orlando who came together to say that a month has gone by now, and we’ve seen nothing but more violence and discrimination,” said Ida Eskamani, a spokeswoman for the gay and transgender civil rights group Equality Florida. […]

The group presented staff of the Republican senator and former presidential candidate with a list of demands, including that lawmakers reject financial contributions from the National Rifle Association; implement universal background checks; enact legislation making it a crime to knowingly import, sell, manufacture, transfer, or possess a semiautomatic assault weapon or large capacity ammunition-feeding device; and allow federal research on gun violence.

Senator Rubio brushed off the protests in a statement, as Florida Politics notes:

A Rubio spokesperson in Washington issued a statement that read:

“Senator Rubio respects the views of others on these difficult issues, and he welcomes the continued input he is receiving from people across the political spectrum. Senator Rubio and our office continue working around the clock on federal casework to assist victims’ families, survivors and their families, and we stand ready to continue assisting, including lending staff to the victim assistance center as we did for the last few weeks. Over the past month, Senator Rubio has supported common sense compromises to make it easier to track individuals who have been on the terror watch list and later try to buy firearms, all while improving due process protections for law abiding Americans.”

Protesters sang “Somos Orlando” (We Are Orlando) outside Rubio’s office and also created a memorial for those who lost their lives on June 12.