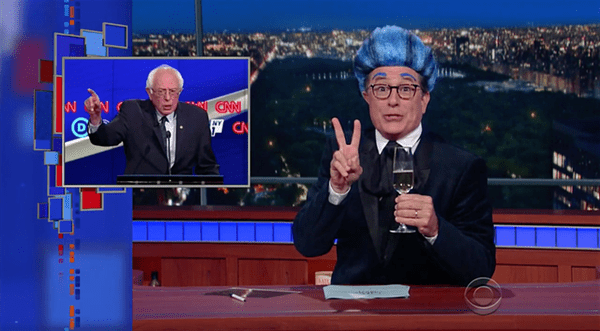 On Tuesday, Stephen Colbert bid farewell to Bernie Sanders, the latest fallen tribute in the 2016 Hungry for Power Games (aka, the 2016 Election; aka the actual Hunger Games). Colbert mourned the loss of Sanders, whom he described as “a man we actually lost months of ago but courageously kept pretending not to be dead.”

Colbert added, “the bar is closing and America has to go home with someone.”

Colbert joked that the joint rally slogan of “Stronger Together” was probably because Sanders wouldn’t agree to Clinton’s original idea: “It’s About F*cking Time.” Still, the Late Show host gave Sanders credit for “[exciting] young voters with his pure sex appeal,” and creating a political movement to stick it to the political elite.

To demonstrate, however, that the political establishment had won, Colbert ate a plate of caviar that spelled out, “Bernie”–something he joked he would later regret.

Said Colbert of Bernie in his goodbye, “Farewell, Bernie. No one else expressed the frustrations of so many Americans without blaming it on Mexicans or Muslims.”