Oooh, gurl, we are BACK in a big way. RuPaul’s Drag Race All Stars 2 has got me feeling all kinds of ways. The first iteration of All Stars felt like it was missing some key queens in the mix, and the team twist hurt a lot more than it helped the season’s momentum.

HOW-EV-ER, DARLING, All Stars 2 is packed with so many fan-favorite faces (and vile villains) that I’m not even sure they can do an All Stars 3 after this. Last night’s Ruper-sized premiere made so many smart choices, it almost felt like fan-fiction. I am so here for this.

Let’s hash out all the SPOILER-Y details, below, just in case someone is saving this on their DVR (and has zero gay friends on Facebook wigging out about it). 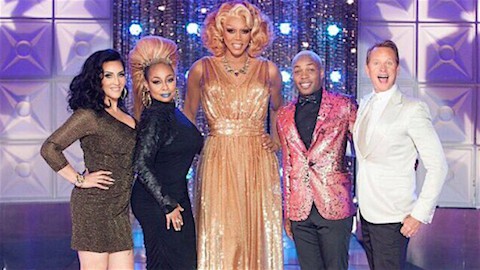 Obviously the cast is amazing, and we’ll get to them in our rankings below. But, let’s talk about some other things this show is doing right already. First off, they started with the reading challenge, and the library was open, closed and burned to the ground. Alaska won the challenge with an appropriately twisted performance. Her best read was on Adore: “These other girls are going to say you have terrible makeup skills, you have no fashion sense and you’re dumb as a rock. But they’re wrong. You don’t have terrible makeup skills!” It was her hilariously clumsy Laganja-inspired death drop that really capped it off and earned the win. BUT! The real read of the night, maybe of the century, came courtesy of Katya. She laid into Roxxxy with such a pointed and perfect barb that it may have even gone a little too far: “I think about you all the time. Especially in the morning. At the bus stop.” I MEAN … I think I might have somehow death-dropped off my own couch from a sitting position just HEARING THAT, HENNY. All I know is I ended up on the floor.

Then, Drag Race did the smartest challenge they’ve done yet: A Talent Show. This is probably any drag fan’s number one complaint about this show. It hardly ever lets the girls do what they are truly best at. This was an opportunity for the queens to show us the kind of show they’d put on in the club. I feel like every season should start like this going forward.

Now let’s talk about those TWISTS. First, the ladies won’t be lip syncing for their lives, they will be lip syncing for their legacy, which in this case means $10,000 and the power to eliminate one of the bottom performers. In theory, this should lead to some high-octane lip sync performances, and a whole mess of drama backstage. Not sure if it will necessarily help us crown the most qualified winner, but damn it will make some good TV. That’s not even the final gay gasp-inducing twist of the night. When the eliminated queen went back to the workroom to grab her RuPaul statuette, there was a special message about the chance to COME BACK for Ru-venge. DRAMAAAAAAAAA!

Can we also talk about Raven Symoné serving full on Auntie Entity realness on the judging panel? Can we keep her and send Todrick Hall home, please?

Alright, alright, alright, let’s talk about our rankings. These are purely subjective, obviously, and I’m taking into account previous performances and my general gut feelings about who’s best, okrrrr?

1. Come through, Alaska. Anyone who’s caught one of Alaska’s caberet-style shows since her appearance on season five — and I’ve seen several — knows what a stellar performer she is. She’s perfected her look, honed her persona and knows exactly how to leverage her talents. She’s not a great singer from a Simon Cowell point of view, but she’s playing a character and slips in and out of her demonic growl and “Hiiiiiiiiiii!” squeal for a relentlessly entertaining performance every time. Even the few fleeting moments we saw of “The Gayest Thing You’ve Ever Seen” was enough to seal her spot in the Top 3. She’s the one to beat.

2. If this show is about Rudemption, a win for Katya would feel the most justified. The season seven queen was sent home much too soon. She is the Joan of Arc of Drag Race. She is a martyr, MAMA. Not only is she one of the most beloved contestants, she’s also one of the most comedically gifted. She can do raunch, camp, physical comedy and still turn a phrase or craft a perfect one-liner. Plus, unlike so many other “comedy queens,” she can dance and give us glamour. Her “gymnastics” act was physically impressive, incorporated her signature humor (that Exorcist-esque spider walk made me guffaw) and felt like a natural extension of her Russian character, which I always love. That Russian routine could get real tired real quick, and I’m glad she knows how to use it sparingly.

3. The third spot feels a bit like a wildcard at this point, but I’m going with my gut: Alyssa Edwards. During her talent show performance, she essentially gave us a complete one-woman show in the span of a few minutes. It had everything: splits, rap and even puppets (everybody loves puppets!). It reminded me more than a little of Sonja Morgan’s caburlesque routine, which just made me love it even more. Alyssa is almost superhumanly talented. She’s a great dancer, but everything else can be very hit or miss. She might be responsible for some of Drag Race’s most notable quotables, but rarely are they intentional. Her fashion choices vacillate wildly from sequin showgirl perfection to bizarre beaded nightmares. Alyssa has the talent to win this, but her real secret is she doesn’t know how to channel it purposefully.

4. Ugh, I hate to admit it, but I guess Roxxxy is my next pick for most likely winner. The judges love her for some reason. I just can’t get into it. Her weak justification for her villainous behavior in season five was that she was “playing mind games.” Gurl. Those weren’t mind games. You were just being mean. You were just a nasty, insecure person. That wasn’t a strategy! My personal distaste for Roxxxy’s personality aside, she did turn out a pretty stellar burlesque performance (though it wasn’t nearly as good as some of the others). Her T-Swift lip sync, however, was far superior and felt more appropriate for the song than Tati’s.

5. Speaking of Tatianna, I think she may be this season’s dark horse. That’s definitely what this edit wants us to believe. When they announced her talent as “spoken word,” I audibly groaned, but it turned out to be just wink-wink enough to pull it off. Content aside — which was a bit predictable and not as subversive as she thought it was — what she did give us was PRECISION. Call it serving hands, call it pop-and-lockography, call it whatever you’d like. She can work that body-ody-ody.

7. I wasn’t counting on dropping Adore so far down the list, but I’m already tired of her “I don’t belong here!” story arc. We get it. I loved Adore during her season. I love everything she does now. She’s got a powerhouse voice, and she knows who she is. There are few reality cliches that bore me faster than the “I don’t want to be here” girl. I don’t need Ru or Michelle to do their own “WE WERE ALL ROOTING FOR YOU!” speech, and I feel like that’s where this is heading.

8. Oh, no, Phi Phi. Unlike Roxxxy, I am buying Phi’s regret. I do think she is sincerely sorry for how she acted on camera and really wants to show us how she’s grown. Why she decided to sing is beyond me. I don’t even think the problem was that she chose to sing a capella. The problem was that she chose to sing at all. It was cringe-worthy. Since her appearance on the show, I’ve been obsessed with Phi’s Instagram, and I wish she took this opportunity to show us some really innovative looks.

9. Another poor choice this week? Ginger Minj’s unnecessarily earnest soft rock ballad. This is not RuPaul’s Wynonna Judd Race. Save it for the Gainesville LGBTQ Center fundraiser dinner, gurl.

10. Coco Montrese sent her damn self home. The whole point of the challenge was to do the most quintessentially you thing you do. This was exactly the wrong time to try something different. Get out there and give us “If,” give us “Together Again,” give us “All For You,” give us goddamn “Rhythm Nation.” Give us a medley! If this is what you’re doing at your club shows, count me out forever.

The party don’t stop next week when we dive muff-first in Snatch Game.

How would you rank the queens? Tell us in the comments.