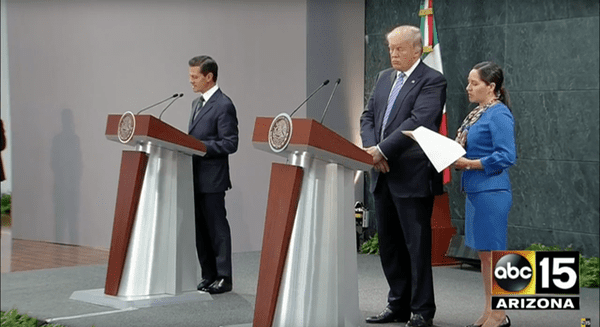 Donald Trump will address reporters alongside Mexican President Enrique Peña Nieto after meeting with him privately in Mexico City on Wednesday.

Trump’s visit to Mexico is historic in large part because his candidacy was launched on the back of xenophobic slurs which Trump spewed about Mexican immigrants coming to the U.S.

Throughout the campaign, Trump has repeatedly insisted that “we will build a wall” between the U.S. and Mexico to stop illegal immigration despite the fact that illegal immigration is near historic lows and border police say a wall across the U.S./Mexico border wouldn’t actually help them do their job.

Trump meeting with @EPN just about underway. Statements to press to follow. Per Mexican officials here at presidential palace.

No US flag. Just a Mexican flag behind podiums for EPN Trump press statements in Mexico City. pic.twitter.com/Hj4GBDsEBJ

As for the motivation behind the trip, a Trump adviser said Wednesday that the visit was intended mainly as a “photo op.”

Trump adviser tells @BrookeBCNN photo op was major reason 2 go 2 MX City. That is NOT leadership. That is a cheap prop devoid of substance!

Trump announced that he would visit Mexico on Tuesday.

Watch live as Trump visits Mexico, below, with two choices of live stream (just in case).

UPDATE: The live stream has ended but you can watch the remarks, below.