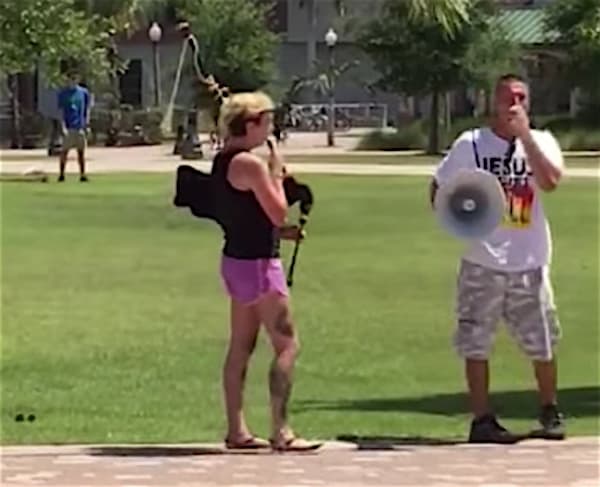 There are many options available for dealing with mouthy anti-LGBT street preacher trolls: ignore them, laugh at them, shout them down, drown them out….

Last week, a student at Florida Gulf Coast University in Fort Myers, Miami, went for the latter option by following a hate preacher around campus with her bagpipes.

Brice Ehmig – who said the preacher was comparing homosexuality with bestiality – told the Daily Record:

“I began to play him a classic tune of spiritual rejuvenation and wholesome melancholy in ‘Amazing Grace’. I could see in his eyes and the tense veins in his face and neck that he was enraged by my presence. So after four minutes I did give him some space for a little bit. Then he started going on more about homosexuality, and earned my relentless playing even more so. I then called over my girlfriend and gave her a big kiss right in front of the ‘preacher’ and group of people watching.”

“I have seen too much tragedy in the LGBTQ community to let a man in cargo pants tell me I am the embodiment of sin. I am a gay bagpiper and I’m proud. I decided since this is my last year at university that I should do things that make me feel brave. After years of dealing with the homophobic comments aimed at me by the preacher, I felt I needed to stand up against these false prophets spewing bigotry. I have fought hard for my rights….These preachers have been on campus every year that I have been here at the University and they have all been part of the same group…They post videos on YouTube, which primarily record hostile situations, law enforcement interactions and close calls with angered citizens. If their intent was to educate the public with the peace and love of real religion, they would not need to record and post mostly the bad interactions they had. Their intent is clearly to catch people losing control as they target them, and they want everyone to believe that they are the victims.”