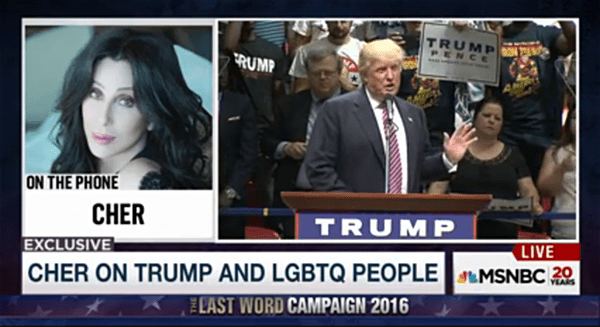 Following her barnstorming performance stumping for Hillary in Provincetown, Cher appeared on The Last Word with Lawrence O’Donnell on Tuesday to drum up more support for the Democratic candidate and attack Donald Trump.

When asked what Cher thinks of the promise Trump made at the Republican National Convention to protect the LGBTQ community from the “oppression of a hateful foreign ideology,” Cher could only laugh and say, “Oh come on.”

She added, “He has says those letters like a child that is just learning the alphabet. And then pokes his finger in the air for ‘Q.’ He is the most disingenuous man I’ve ever seen. And I want to tell you: my people will not believe him for a minute.”

Referring to the anti-LGBT evangelical conference Donald Trump attended in Orlando just days shy of the two month anniversary of the Pulse massacre, Cher asked, “How does he go from that meeting to telling my people that he will protect them?”

She added,  “I fear for what they will do to those people–to my people.”