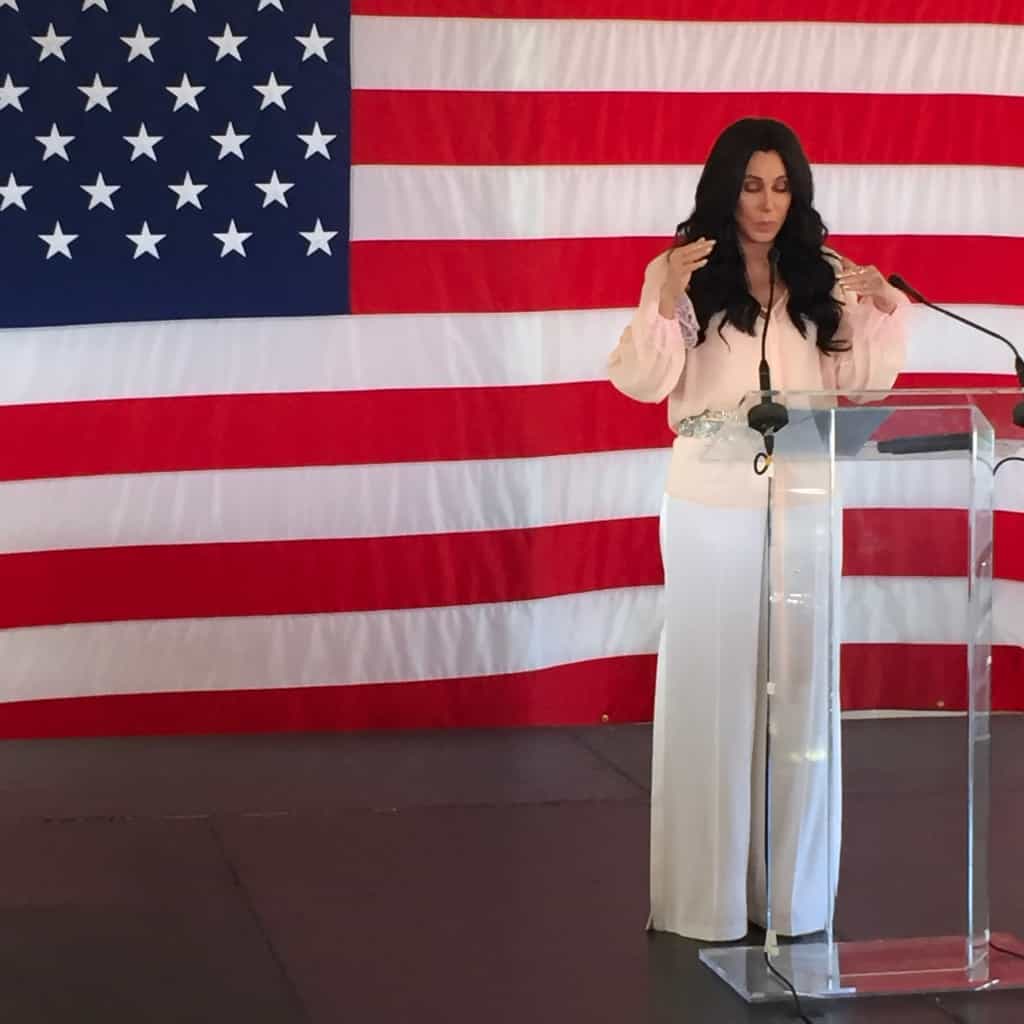 You may have heard that there was a fundraiser in Provincetown on Sunday for Hillary. Cher was there. I attended. It  wasn’t just to see Cher. But she was the highlight.

I went for personal reasons.  I want to be part of another election providing proof and legacy to the work of so many over the last few generations. I still get chills thinking about the last one.

Clinton said in her remarks, Barack Obama “saved the country from a second Great Depression” which among other things–no scandals, big wins domestically and abroad in the face of racist legislators who won’t legislate–make him a hard act to follow.

Video 1: Provincetown for Hillary, Cher is so likable stumping at a fundraiser Aug 21, 2016.

Video 2: Hillary Cher Event in Provincetown. Cher lets it rip on Donald Trump and she can and does say things that others don’t. Wait for it…

Comedian Kate Clinton kept the event going, rolling out the jokes about her “sister”, and asking those attacking the candidate to her to “cut her some slacks.” We are faced with a choice, she said, and it is not as some have suggested, between apples and oranges, but rather “between  a well-qualified woman…and an orange.”

Organizers Bryan Rafanelli and Alix Ritchie seemed pleased to be hosting their second Provincetown fundraiser for Clinton, and especially proud that the even brought in more than $1.5 million.

Video 3: Hillary Cher in Provincetown. Cher plays to the audience comparing Donald Trump to Patty McCormack in Bad Seed. Predicts the four-letter word we’ll be saying the morning after if Trump is elected.

Video 4: Hillary Cher Event in Provincetown. In which Cher talks about her first gay friends taking her to Palm Springs; her first and lifelong lesbian friend; Chaz; and why she’s with the LGBT.

And it was great to be there.  Maura Healey, the avowed sports fanatic and open lesbian Attorney General of Massachusetts fired everyone up. Billie Jean King’s mere presence and candid comments about how her life has changed over the past decades reminded  how far things have come.

Massachusetts Senator Ed Markey left the crowd with the thought, “If you want to live like a Republican, you have to vote like a Democrat,” which seemed to strike a note with this audience of donors, many of whom had paid $500, $2700 and more per person. There were a number of $45 tickets that were quickly snapped as soon as made available.

The candidate was present and gave a forceful version of her stump speech, joked about how lucky we are to live and work in Provincetown, and was given the opportunity to show her humanity, kindness and good humor by picking up Rafanelli’s notes when he dropped them onstage, to the approval of the crowd.

But even more looking back than looking forward this event was very much about Cher. During the primary I had a theory that Bernie was the “hope and change” parts of Obama and Hillary was the “effective executive” ones. But maybe there’s room for Cher and Elizabeth Warren and other to collaborate. And, I feel a bit guilty for taking this long to appreciate her.

Video 5: Hillary/Cher event in Provincetown. Key bits of Hillary’s stump speech on campaigning on the issues, Gun Control, and growing up with her father’s small business.

Video 6: Hillary/Cher event in Provincetown. Hillary on the power of Cher.

Ok, obviously I didn’t come of age as a gay guy or start a gay magazine without picking up appreciation for some Cher. I’m well aware of her love and support for her trans son, Chaz, and that her longevity as a public figure is matched by her commitment to the gays.

But, it turns out that I can respect her even more as a speaker, tweeter, and most weirdly as a relatable, likable person.

On the third stop of a whirlwind gay fundraising tour — Miami on Friday, Fire Island for an event Saturday, and Provincetown on Sunday — she told jokes, made asides, and recounted supposedly inside stories as if they had just sprung to mind and might get her in trouble. Her job was to sell certain parts of the Clinton story and she did it well.

I’m pleased to share the photos and videos with you all.

Meanwhile, outside the event… a legalize marijuana protest and the last standing Bernie Bro… 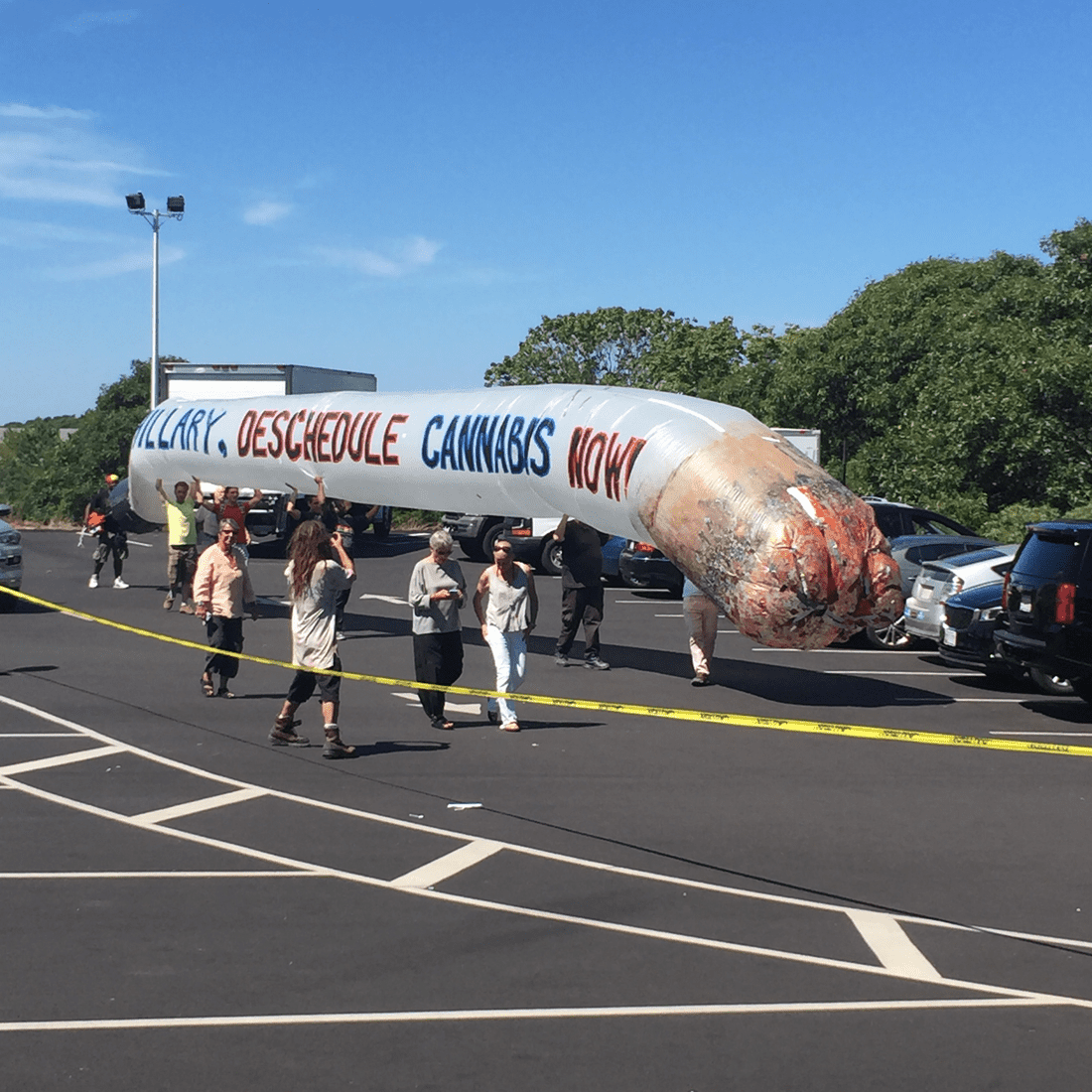 All video and images shot by Michael Goff