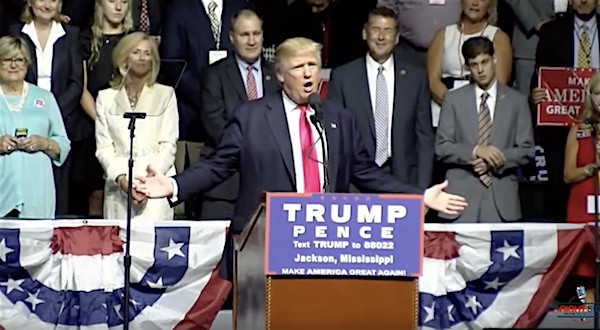 At a rally in Jackson, Mississippi yesterday, Donald Trump tried to make the case that Hillary Clinton’s a “bigot”, not him:

“Hillary Clinton is a bigot who sees people of color only as votes, not as human beings worthy of a better future.She doesn’t care what her policies have done to your communities. She has no remorse. She’s going to do nothing for Hispanics and African-Americans.”

Clinton responded in a phone interview with Anderson Cooper:

“He is taking a hate movement mainstream. He’s brought it into his campaign. He is bringing it to our communities and our country. And someone who has questioned the citizenship of the first African-American president, who has courted white supremacists, who has been sued for housing discrimination against communities of color, who has attacked a judge for his Mexican heritage and promised a mass deportation force, is someone who is very much peddling bigotry and prejudice and paranoia.”

Clinton said she would have more to say in a speech today: