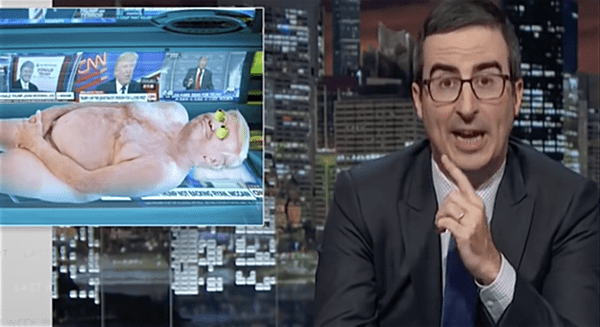 On Last Week Tonight John Oliver once again tangled with Republican presidential candidate Donald Trump. Oliver urged Trump to drop out of the race, arguing it’s in his best interest.

After all, Trump is all about winning. And should he lose to Hillary that would be humiliating and brand-destroying for him. But winning wouldn’t be any better. Trump would then have to actually be president, live in government housing and, you know, do work.

So, Oliver argued, Trump should drop out. In a direct appeal to Trump, Oliver said, “You have accidentally made upwards of 4 good points.” Included among them: Trump has “effectively exposed the length to which political parties will go to appease their base.” Amen.

Hyping the pros of dropping out, Oliver said,

“Just think about how triumphant it would feel to say on national television: ‘I openly ran on a platform of impossibly ignorant proposals steeped in racial bigotry and nobody stopped me. n fact, you embraced me for it. What the f*ck was that about?”

Oliver added, “If you drop out in order to teach America a lesson, you would not be a loser. You would be a legend. There’d be a federal holiday in your honor.”