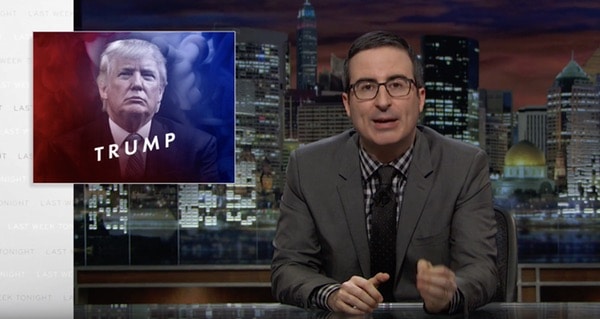 John Oliver has kept his mouth shut about Donald Trump thus far in the election season, but last night delivered a brutal takedown of Donald Drumpf, which Oliver points out was the Trump family’s original name.

“Drumpf is much less magical. It’s the sound produced when a morbidly obese pigeon flies into the window of a foreclosed Old Navy. Drumpf. It’s the sound of a bottle of store-brand root beer falling off the shelf in a gas station minimart. And it may seem weird to bring up his ancestral name, but to quote Donald Trump, he ‘should be proud of his heritage’ … because Drumpf is much more reflective of who he actually is.”

Oliver’s segment is a step-by-step debunking of Trump’s talking points and exaggerations, from his claims of being “tough”, to the self-funding of his campaign, to his “success” in business:

He’s a man who “gives the appearance of wealth, but is actually a cheap tool.”

Oliver starts the segment by saying he can’t believe he’s doing it. Why?

“I say that knowing every time his name is said out loud, he has a shattering orgasm…At this point, Donald Trump is America’s back mole. It may have seemed harmless a year ago, but now that it has gotten frighteningly bigger, it is no longer wise to ignore it.”

He says he expects a lawsuit from Trump this morning.

Previous Post: « Stacey Dash Wins the Prize for Most ‘WTF’ Moment of the Oscars, Then Explains It: WATCH
Next Post: Robert Mugabe Tells U.S., Others to Keep Billions in Aid if Gay Rights are Condition of Receiving It »