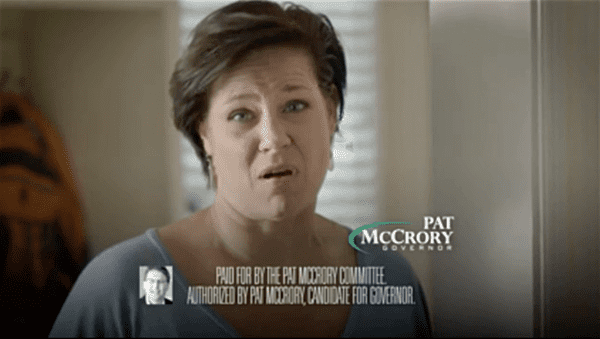 Pat McCrory is again using the transgender bathroom myth to scare North Carolinians, and this time to attack his opponent Roy Cooper.

In a new attack ad, Governor McCrory attacks his Democratic challenger, state AG Roy Cooper, by associating him with opposition to the state’s notorious anti-transgender bathroom bill. While only a minority of North Carolina voters are in favor of HB 2, McCrory is betting that he can once again depict the anti-LGBT bill as being about protecting people from sexual predators.

“At nine, I was molested by a teenager. When I found out that President Obama and Roy Cooper want to force school children to share the same locker room, shower and restroom with someone who claims to be the opposite sex, I was horrified. Governor McCrory knows this is not about discrimination, money or politics. He’s standing up for us under extreme pressure and doing what’s right. Our governor is on our side.”

Said Chis Agro, executive director of Equality NC, “The governor is resorting to scare tactics as he sees himself trailing on this and others issues.”

McCrory seems desperate and willing to do anything to win voters’ support, as Cooper has steadily been gaining on him in the polls. The most recent poll, conducted by NBC/WSJ/Marist has Cooper up 7 points against McCrory.