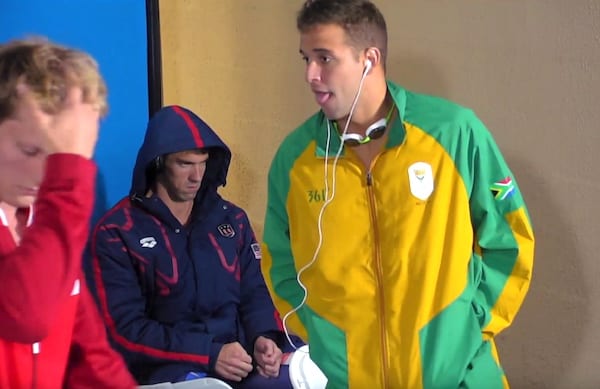 The best and biggest Twitter meme to come out of the Olympics so far has been ‘PhelpsFace’, inspired by a pissed-off still photo of Michael Phelps taken when he was warming up for his semifinal heat in the 200m butterfly event.

So what caused Phelps to make the face?

Here’s video of the moment that sparked #PhelpsFace, which occurred as South African swimmer Chad le Clos appeared to annoy Phelps by shadowboxing in his line of vision before the race.

As the sportscasters note, “This is great television.”

As New York magazine notes, the two swimmers have a longstanding rivalry, made more bitter because it got personal.

Phelps lost to le Clos in 2012 by five hundredths of a second, so le Clos sent Phelps into retirement with a loss. When Phelps came out of retirement two years later he decided to take on le Clos in the butterfly again, and beat him after le Clos trash-talked him. And so did le Clos’s dad, taunting Phelps.

But then it got personal:

A few months later, le Clos revealed that the back-and-forth with Phelps hurt him. And then he tried to hurt Phelps. “If I was as great as he was, I would conduct myself in a way children would be proud of,” le Clos said, clearly referencing Phelps’s 2014 DUI arrest and subsequent stint in rehab. “I thought I was good friends with him, clearly not. I don’t think he likes me very much,” he added.

So that’s what caused the #PhelpsFace. And Phelps beat le Clos on Monday night, but both lost to Hungarian Tamas Kenderesi.

Tonight is the final. We’ll see where it goes from here.

And here are a few of the #PhelpsFace memes:

When u realize there's enough food in the wrld to feed everyone but 1/9 will go to sleep hungry tonight #PhelpsFace pic.twitter.com/kYwLYgk7uo

When you ask for almond milk then see them pouring dairy. #PhelpsFace pic.twitter.com/947RDRn4ic

When you open @Grindr and there's only tops. #PhelpsFace pic.twitter.com/TNGkandYaN