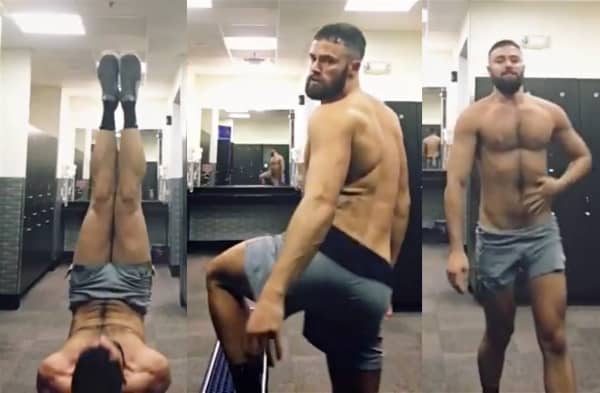 The legendary Ms. Britney Spears returned to the VMAs on Sunday night and turned in a solid performance that is on par with the consummate performer we know Spears to be.

While the decision to have Spears perform after Beyoncé did her Lemonade medley was, at best, questionable, it was fantastic to see the pop princess performing at the same award show in which she served up no less than three iconic performances.

In the wake of Spears’ performance, Dan Avery at NewNowNext did some digging on social media and came across one fan’s rendition of Spears’ new track “Private Show” that is today making the internet a little bit thirstier.

Before he gets down to Britney’s beat, “Gutter Spice” checks to make sure the coast is clear.

Sadly, the performance is cut short by the arrival of a stranger, who has officially earned the title of Life Ruiner.

As of this posting, the Twitter video has been retweeted over 700 times and been liked over 2,000 times.

Among those “Gutter Spice” hopes has seen the video? His ex, as made clear with this pitch-perfect Britney-related VMA screengrab.

And while Gutter Spice certainly seems to be a Britney Stan, it’s not clear that he likes that assignation.

He also asks the question anyone who ever received a modicum of fame eventually wonders (even if never out loud): “will I get a man out of all this exposure?”

To be extra clear, “Gutter Spice” wants you to know he’s not angry about the attention he’s receiving.

Previous Post: « Matt Bomer is Going to Play a Transgender Sex Worker and It’s Instantly Controversial
Next Post: Laura Ingraham: ‘What If Colin Kaepernick Disrespected the Rainbow Flag Not the US Flag?’ »