Laura Ingraham: 'What If Colin Kaepernick Disrespected The Rainbow Flag Not The US Flag?’ - Towleroad Gay News 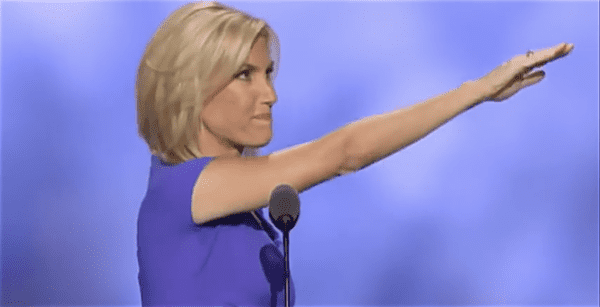 Conservative right-wing radio host Laura Ingraham decided to involve the LGBT community in the consternation over San Francisco 49ers quarterback Colin Kaepernick refusing to stand for the national anthem during a recent game.

Kaepernick invoked the ire of many right-wing talking heads for sitting on the side-lines during the anthem, which he says he did to protest the oppression of people of color in the U.S.

Kaepernick told NFL Media,  “I am not going to stand up to show pride in a flag for a country that oppresses black people and people of color. To me, this is bigger than football and it would be selfish on my part to look the other way. There are bodies in the street and people getting paid leave and getting away with murder.”

Seemingly not satisfied with how progressives and liberals have responded to Kaepernick’s action, Ingraham tried to stir the pot by suggesting that if it was a rainbow flag that had been “disrespected” by Kaepernick rather than the American flag, liberals would be up in arms.

Wrote Ingraham on Twitter, “What would have happened if Kapernick [sic] disrespected the rainbow flag bef the game?”

Good Q: "What would have happened if Kapernick disrespected the rainbow flag bef the game?"

With her tweet, Ingraham is suggesting that liberals care more about the rainbow gay rights flag than they do about the American flag. Thus they don’t really love America and are not true patriots.

In other words, this is Freedom Fries all over again.

Reaction to Ingraham’s “Good Q”, was swift on social media and largely against Ingraham. Though there were many who voiced support for Ingraham’s sentiment.

One father who identified himself as a fan of Ingraham’s wasn’t pleased with her tweet, saying, “That question is very provocative coming from you. I am a big fan of yours,but this question reinforces divisive stereotypes.”

That question is very provocative coming from you. I am a big fan of yours,but this question reinforces divisive stereotypes.

Another Ingraham fan took her hypothetical to the most fact-free, right-wing extreme, saying that if Kaepernick had somehow disrespected the rainbow flag, “liberals would want his head chopped off. Fact. They like that flag more than the USA flag. Fact.”

omg liberals would want his head chopped off. Fact. They like that flag more than the USA flag. Fact.

Because this is Twitter, there was also plenty of sass.

Save this one for debate prep, Laura! https://t.co/ApFwVQ9E4N

And plenty of fact-checking along with pointing out the false equivalency inherent to Ingraham’s question.

when we start pledging allegiance to it and singing to it before every game, then i will tell you.

what exactly would disrespecting the rainbow flag look like?