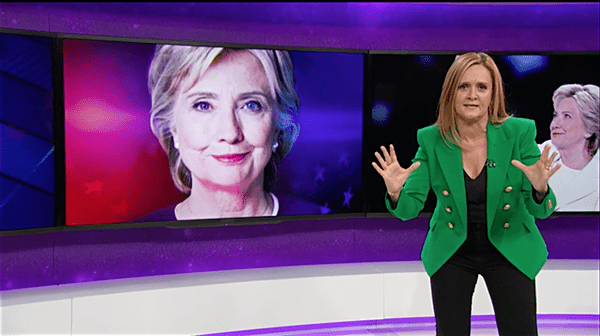 As opposed to the doom and gloom of the RNC, the DNC “left us feeling like we got a national blow-job from the American flag,” Bee quipped.

And while the Democrats don’t always excel at throwing conventions (see: the 2004 DNC balloon drop fiasco), they had extra motivation this year. “Turns out, the Democrats had it in them all along. All they had to do to get their sh*t together was to have the looming certainty of Armageddon,” said Bee.

There were also plenty of people on hand to vouch for Hillary Clinton’s credentials at the DNC, including “half the f*cking Pentagon standing on stage saying, ‘Vote for Hillary if you want to live.'” Not to mention past presidents, governors, generals, Republicans and more.

Despite all those endorsements, and Clinton’s unprecedented qualifications, Hillary might still lose to “the least qualified candidate to ever lurch into the public spotlight and sh*t on Gold Star moms while cradling Putin’s sweaty sack.” Bee added, “Let’s hope Hillary doesn’t get lipstick on her teeth between now and November or it’s all over.”