You are here: Home / Obama: Trump Keeps on Proving He’s Unfit to Be President – WATCH 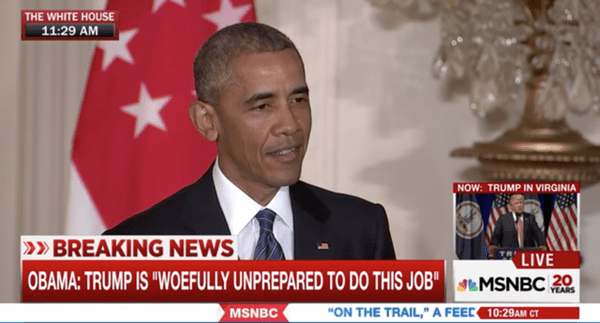 President Obama on Tuesday kept up his assault on Republican presidential nominee Donald Trump, saying that he believes Trump is “unfit” to be commander-in-chief.

Speaking before reporters at a press conference with the Prime Minister of Singapore, President Obama said of Trump, “The fact that he doesn’t appear to have basic knowledge around critical issues in Europe, in the Middle East, in Asia means that he’s woefully unprepared to do this job.”

Obama says Trump "keeps on proving" he is unfit to serve as president https://t.co/2UE6BImNS5 https://t.co/gDsjNQUVLK

Drawing a distinction between Trump and past Republican presidential nominees, Obama made clear that while he disagreed with John McCain and Mitt Romney, whom he faced off against in 2008 and 2012 respectively, he never doubted that either individual would be able to faithfully execute the duties of commander-in-chief. Obama could not say the same about Trump. He explained,

“I never thought that [McCain or Romney] couldn’t do the job. And had they won I would’ve been disappointed but I would have said to all Americans, ‘This is our president. And I know that they are going to abide by certain norms and rules and common sense; will observe basic decency, will have enough knowledge about economic policy and foreign policy, and our constitutional traditions and rule of law that our government will work. And we will compete four years from now to try and win an election.’ But that’s not the situation here. And that’s not just my opinion. That’s the opinion of many prominent Republicans. There has to come a point at which you say enough. And the alternative is that the entire party — the Republican party — effectively endorses and validates the positions that are being taken by Mr. Trump.

Obama to GOP: “There has to come a point in which you say ‘enough.’” https://t.co/FBMvsyIcfv

Previous Post: « Seattle Bans Gay Conversion Therapy, Which is Still Perfectly Legal in 80% of the Nation
Next Post: Samantha Bee Recaps the DNC: ‘Vote for Hillary If You Want to Live’ – WATCH »