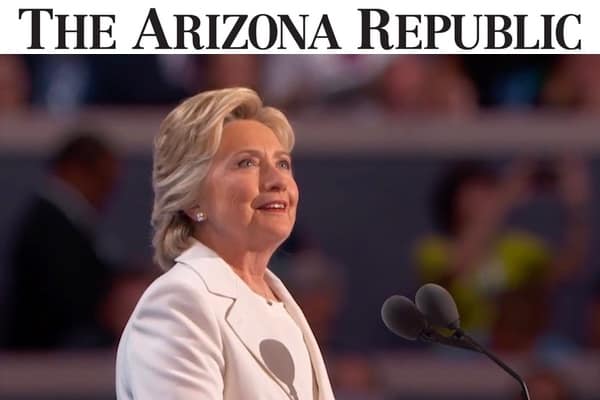 The paper used to be called The Arizona Republican, and last night they did something they’ve never done – endorsed a Democratic nominee for president.

Since The Arizona Republic began publication in 1890, we have never endorsed a Democrat over a Republican for president. Never. This reflects a deep philosophical appreciation for conservative ideals and Republican principles.

This year is different.

The 2016 Republican candidate is not conservative and he is not qualified.

That’s why, for the first time in our history, The Arizona Republic will support a Democrat for president.

The paper goes on to cite Clinton’s breadth of experience, and bangs Trump for keeping his tax returns a secret:

Trump hasn’t even let the American people scrutinize his tax returns, which could help the nation judge his claims of business acumen.

And it gets more brutal:

Trump responds to criticism with the petulance of verbal spit wads.

That’s beneath our national dignity.

When the president of the United States speaks, the world expects substance. Not a blistering tweet…

Trump’s inability to control himself or be controlled by others represents a real threat to our national security. His recent efforts to stay on script are not reassuring. They are phony.

The president commands our nuclear arsenal. Trump can’t command his own rhetoric.

And it goes on.

The paper concludes by saying that Clinton “can move us beyond rancor and incivility” unlike Trump who “offers a recipe for permanent civil discord.”

Read it all here.