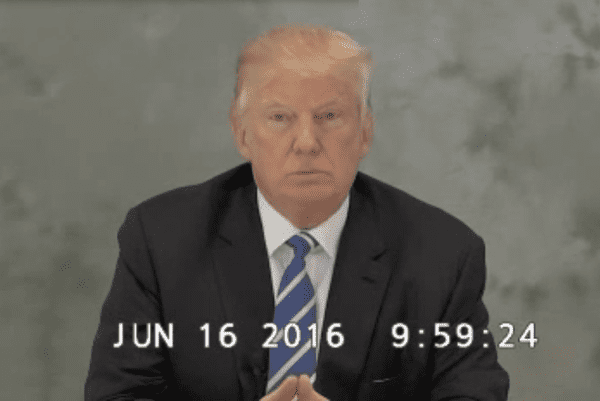 Videos have just been released of a deposition Donald Trump gave in June in which he suggests that he planned to call illegal Mexican immigrants “rapists” during his campaign kick-off speech.

BuzzFeed filed a motion seeking the release of the videos and a judge released them on Friday.

The deposition was given after Trump sued a number of restaurants that backed out of a business deal with the Republican nominee after he made his incendiary comments during his announcement speech.

Trump suggests in one exchange that his incendiary comments about Mexicans made during his campaign kickoff — he said people coming here from the country were “rapists” — were premeditated. Another answer shows Trump bragging about how he signs hundreds of real estate leases but relies on others to actually read and review the documents.

The depositions are related to Trump’s $200 million project to transform the Old Post Office building — a taxpayer-owned landmark just five blocks from White House — into a luxury hotel. Trump’s company won the right to develop the project by making numerous promises to the government that he failed to keep.

In his testimony, which was conducted under oath, Trump complained that the chefs who objected to his rhetoric about undocumented immigrants were being “politically correct” and “grandstanding” when they canceled their plans to operate at Trump’s new hotel at the historic Old Post Office on Pennsylvania Avenue.

Trump also explained at the deposition when and why he wrote the “rapists” comment, saying that he did not write the statement in advance of his presidential announcement speech last year but that he did plan it.

“All I’m doing is bringing up a statement that is very real about illegal immigration, and I think most people think I’m right,” he said.

Watch the videos, below.

The first video turns to Trump’s comments about Mexican immigrants approximately at the 44:30 mark.

Trump discusses Judge Curiel at around the 8:34 mark.