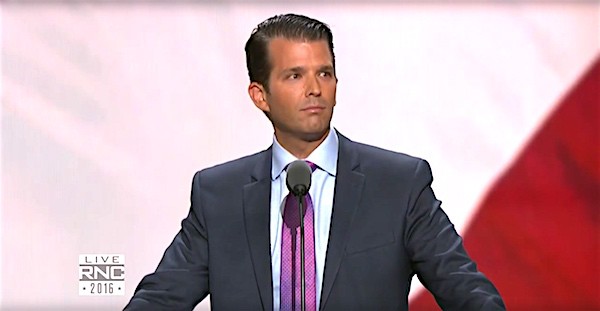 Donald Trump Jr. made a Holocaust joke with regard to the media’s treatment of his father today in a radio interview with Mike Stigall on Talk Radio 1210 WPHT.

Trump Jr. was comparing treatment of his father by the media to that of Hillary Clinton:

“The media has been her number one surrogate in this. Without the media, this wouldn’t even be a contest. But the media has built her up. They’ve let her slide on every indiscrepancy, on every lie, on every DNC game trying to get Bernie Sanders out of the thing. I mean, if Republicans were doing that, they’d be warming up the gas chamber right now. It’s a very different system — there’s nothing fair about it.”

.@DonaldJTrumpJr: We hope you understand the sensitivity and hurt of making Holocaust jokes. We hope you retract.https://t.co/jL2ZC9Z8pH

Trump Jr. later told MSNBC’s Katy Tur that the joke was not at all anti-Semitic, that he was referencing “corporal punishment”:

Trump Jr. tells @KatyTurNBC that his "gas chamber" comment is referencing corporal punishment, not in any way anti-Semitic.