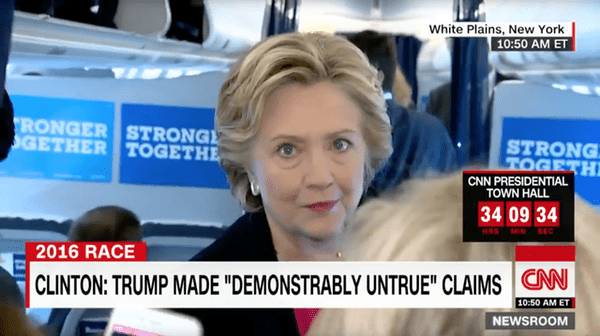 Hillary Clinton responded to Donald Trump’s complaints about his microphone during last night’s presidential debate with a zinger: “Anybody who complains about the microphone is not having a good night.”

Clinton made the remark to a gaggle of press on her campaign plane on Tuesday. The assembled group of journalists can be heard reacting to Clinton’s barb thrown at Trump at the very end of the below clip.

As Talking Points Memo points out, Trump went on Fox and Friends earlier to complain about his mic:

Real Clear Politics reports on Clinton’s comments to her press pool right before she made her zinger:

I think his demeanor, his temperament, his behavior on the stage could be seen by everybody. People can draw their own conclusions, and I thought on several occasions, he was making charges and claims that were demonstrably untrue. Offering opinions that I think a lot of people find offensive. He can represent himself how he chooses, but the real point is about temperament and fitness and qualification to hold the most important, hardest job in the world, and I think people saw last night, there were some very clear differences between us…