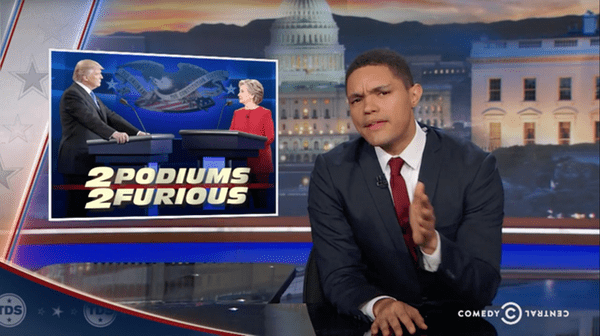 Trevor Noah provided a recap last night of the first presidential debate between Hillary Clinton and Donald Trump, or as he called it, ‘the real life version of Twitter.’

Noah called out what he saw as the first lie of the evening — Hillary saying “Donald, it’s good to be with you” — and also commented on many of the night’s most talked about moments.

Referring to Trump’s bragging about not paying taxes, Noah joked, “Yeah, you know who else found a way around the rules? OJ. No one likes him.”

Of Hillary’s shimmy, Noah quipped that the former Secretary of State felt compelled to dance because she was in her domain–the domain of words.

As for Trump’s sniffling, Noah, like many others, had a theory as to what that might be about.

Previous Post: « Hillary: ‘Anyone Who Complains About the Microphone is Not Having a Good Night’ – WATCH
Next Post: Calum McSwiggan Denies Making False Report of Hate Crime to Police »