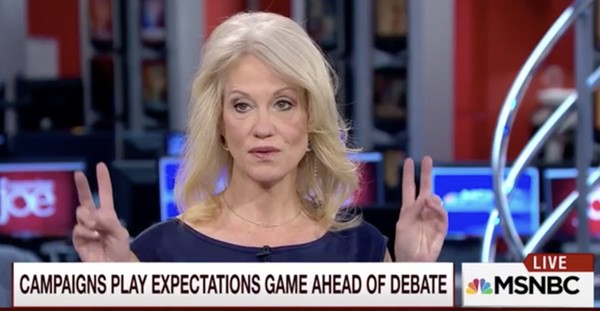 Trump campaign manager Kellyanne Conway appeared on Morning Joe this morning and attacked journalists who are traveling with the campaign to cover it.

“Look at the Twitter feeds of ‘objective reporters’, particularly our embeds. These are not profiles in courage and this is not journalism. There are people who cover our campaign who actually just slander our candidate…I have them on my desk. We printed them all out…Why are they on our campaign plane? Why are they covering our campaign if they can’t say ‘hey, look at this crowd of….look at the RSVPs of 32,000 people in Fort Myers, Florida, and the place only held 8,500. Hey look at the rise in the polls….excuse the Trump campaign if we feel we can’t get a fair shake from certain people.”

RELATED: Four Major Newspapers Do Studies, Reveal What We All Know: Donald Trump is a Bigoted, Lying Fraud

Trump’s press actually flies on a separate plane than the candidate.

And to the Trump campaign, slander is often just fact-checking.

Kellyanne Conway on @morning_joe says some embeds "slander" the Trump campaign,"Why are they on our campaign plane?" https://t.co/rYB2VR8ytL

.@KellyannePolls: Trump 'didn't lie' about Lester Holt, 'a lie would mean that he knew the man's party registration' https://t.co/dZWTCwpoim