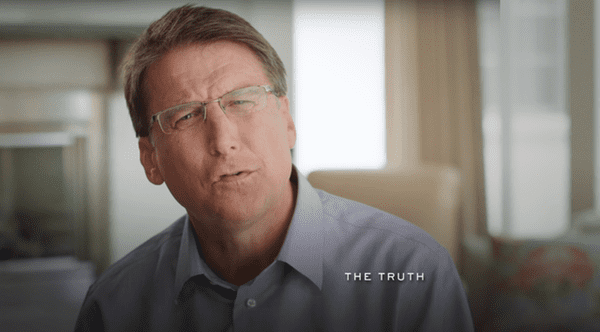 On Wednesday, McCrory, who is currently up for reelection, put out an ad defending his support for HB 2, the discriminatory anti-LGBT ‘bathroom bill’ that banned all local civil rights ordinances in the Tar Heel state.

The ad called “Common Sense” opens with a title card that reads, “The truth about privacy.”

Said McCrory in the ad,

“You know, when we were raising average teacher pay, creating new jobs and cutting taxes, other folks were actually pushing to make our schools allow boys to use the girls’ locker rooms and showers. Are we really talking about this?

“Does the desire to be politically correct outweigh our children’s privacy and safety? Not on my watch. Our kids and teachers are my priority. This is North Carolina. Let’s do what’s right.”

This is the second ad McCrory’s campaign has put out which uses transphobia to fear monger for votes.

Cooper is currently ahead in the latest polls, according to Real Clear Politics.

Previous Post: « Catholic Priest Who Said Gay Men Should Be Celibate Accused of Molesting Teenage Boy – VIDEO
Next Post: ‘Eat Pray Love’ Author Elizabeth Gilbert Comes Out as ‘In Love’ with a Woman »