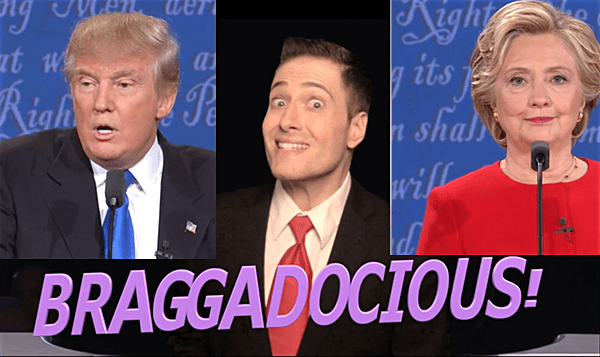 “Wait a minute. Did you just hand him his ass AND quote Martha Stewart? Yaaas, b*tch.”

Randy Rainbow offered his take on the first presidential debate by invoking Trump’s use of the word ‘braggadocious’ to launch into a ‘supercalifragilisticexpialidocious’ Mary Poppins-style musical number.

Though Merriam Webster says Trump got it wrong with his use of the word that sent Twitter into a frenzy, an editor from Vocabulary.com says Rainbow’s connecting ‘braggadocious’ with ‘supercalifragilisticexpialidocious’ is etymologically speaking spot-on.

Previous Post: « John Stamos and Glen Powell Strip Down and Hit the Showers on ‘Scream Queens’ – WATCH
Next Post: Billy on the Street Returns in Trump-Zinging Trailer for Season 5 – WATCH  »