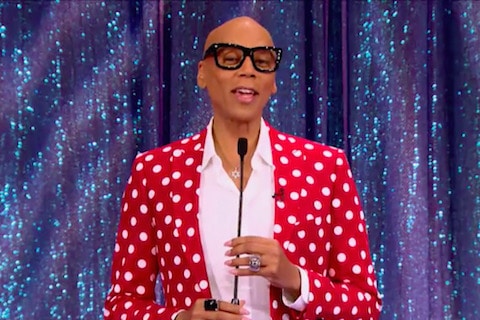 Time to separate the queens from the kweens with everyone’s favorite challenge: Snatch Game. We’re dealing with seasoned pros here, so this should have been a stellar Snatch. There were some high highs, but there were more low lows than I might’ve assumed going into this.

Let’s dish about our favorite impersonations below!

Before we get into the rankings, we’ve got some drama to discuss. Adore arrived the day after her harsh critique looking rough. When Ru visited the workroom, Adore threatened to leave. Ru begged her to stay, but no luck. Even Michelle Visage came a-calling to apologize for, I don’t know, JUDGING on the judging panel, but to no avail. So Adore walked before even getting her wig on for the main challenge. Bye, gurl.

While I love this twist where the girls are sending each other home, I do not need to see the one-on-one convos before the lip sync. They are oddly cliched and stilted in a way that most reality shows are, but they are also the kind of thing this show usually satires so well. It’s just weirdly earnest, and no one actually says anything of value outside the typical reality show argle-bargle. I’d almost rather watch the other girls who are safe gossip and cluck about what they think is going to happen, what they would do in that situation, etc.

I also have a theory about these eliminated girls. Now, this is pure conjecture, but I’m thinking they are going to come back at the end Survivor-style for a final tribal council to pick the ultimate winner.

Alright, alright, let’s get down to business.

1. You know someone slayed the Snatch when they’re firing off jokes even when they’re not being featured. Alaska’s Mae West made the whole game more funny. She nailed West’s signature bawdy humor, but she still kept enough of Alaska in there to save it from being too one-note. I think the Anus singer will go down in the annals of Snatch Game herstory as one of the best. I did not think her lip sync was necessarily superior, and I want to be on the record that she has officially used up all her fake death drops for the season.

2. Right on Alaska’s heels, Katya created a character out of the grab-bag of eccentricities that is Bjork. The Icelandic singer is sort of an easy target, but Katya kept the crazy feeling consistent while still fitting her into the Snatch Game world. Her bathing beauty latex runway look was an instant classic.

3. Remember last week when I said Alyssa Edwards is unintentionally hilarious? Boy did that hold true this week. Don’t get me wrong, I was also cracking up whenever they flashed even the smallest glimpse of her Joan Crawford. But in terms of the actual performance, she recited some of the most obvious lines from Mommie Dearest, often completely apropos of nothing, and the voice was not quite all there. Alyssa’s choices were not great. However, Alyssa delivering these terrible choices was still entertaining, which basically sums up how I feel about her overall.

4. I actually don’t think Phi Phi was being shady when she warned Alyssa and Roxxxy about their Snatch choices. Alyssa’s Joan Crawford was too much Alyssa, and Roxxxy’s Sofia Vergara was not great. If only she could be as astute with her own character selection. She painted the Long Island Medium in broad strokes, and then repeatedly hammered the same joke about Theresa being a fraudulent psychic. It was fine, but it wasn’t great.

5. Not to hate on Ginger too much, but I was really disappointed in her Tammy Faye. I’ll concede that maybe the edit didn’t give her time to shine, but I was actually most put off by her choice in wig. That wig did not scream Tammy Faye. It just felt like a very typical Ginger wig. I also felt like her runway look was heinous, which knocked her down a few pegs for me.

6. Detox’s limits were really on display here. You saw her trying so hard to be clever, and it just fell flat. Detox is often funny and biting and quick in her confessional interviews, but she just cannot write an actual joke.

7. Look, I wasn’t thrilled by Tatianna Grande, but she had at least one or two lukewarm jokes, and that’s more than Roxxxy had. I agree that her runway look was basic and blah, but I think she did a touch better than Roxxxy’s abysmal Alaska during the main challenge.

8. Considering how well she did in her season’s Snatch, it was surprising to see Roxxxy flounder here. Every time Roxxxy reduced her Alaska character down to a shrill “Hiiiiiiii!” I cringed. It was just so obvious that was actually the best she could come up with. These girls are so neck and neck, a lackluster performance like that can send a gurl packing.

9. I still don’t quite understand what Adore’s major malfunction was. Sure Michelle was tough on her, but that’s Michelle’s whole thing. Once she rolled in the workroom looking like a “swollen baby” I was over it and ready to see her go. I was tired of the pity party. I was tired of the humble brag about her fans. I was tired of late-‘90s Limited Too choker necklace and haircut. It’s sad, but this appearance has really soured me on Adore overall.

Previous Post: « Trump Says There are 2 Million ‘Criminal Aliens’ in the US. It’s Not Clear Where He Got that Number.
Next Post: Anderson Cooper, Amy Schumer, Dharun Ravi, Samsung, Michael Phelps, Colin Kaepernick: HOT LINKS »