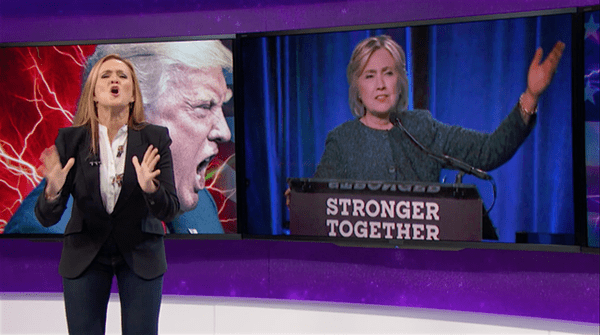 Samantha Bee returned from her hiatus on Monday night just in time for the final stretch of election 2016.

Bee said what many have been feeling when she recapped recent political events by saying “everything is scary now.”

On Hillary’s fainting episode over the weekend, Bee quipped, “Let’s get right to the big news, Hillary Clinton has passed away. She says she’s not dead, but as we know she is a liar.”

The “drip drip drip” of bad headlines for Clinton, as one FOX News anchor put it, has led to Clinton’s lead in the polls being eroded. Which means “we’re back within the margin of terror”, Bee joked.

Then there was Hillary’s remarks over the weekend calling half of all Trump’s supporters a “basket of deplorables.” Said Bee,

“No! Bad! I swear to God Hillary Clinton is the only woman I know who can trip over her own dick. […] What was that? Did you team just decide, hey, nothing else is working, why don’t we try insulting Americans into voting for her. You know, when you see grossly generalistic in the prompter, that’s when you take a breath and think, ‘Do I want to keep talking?’ You don’t barge ahead and torpedo your campaign with a dumb-dumb remark. That’s Bill’s job! Don’t alienate the deplorables. You can’t win a four way race with just plorables!”

But then Bee dug into polling that looks at what Trump’s supporters actually believe. And it turns out more than half of them support rather bigoted and “deplorable” views. Which led Bee to conclude, “we are going to need a bigger basket.”