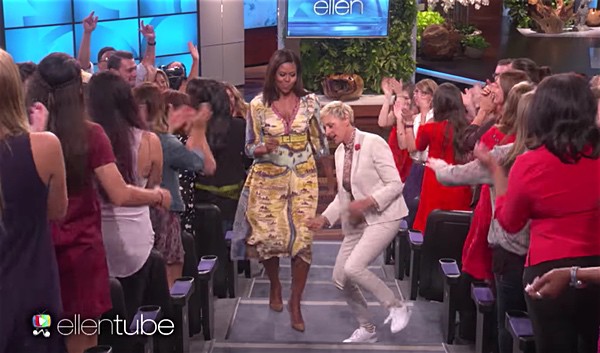 First Lady Michelle Obama joined Ellen DeGeneres to co-host the show with her today and of course it got started with the two of them dancing in the audience.

Finally, they attempted to take a selfie and were surprised by Bradley Cooper who has grown a big billy goat beard.

Cooper attended the 2014 White House State Dinner. Without his underwear.

“I had one tuxedo it didn’t fit. I was so nervous it was gonna rip, and so I decided last minute to 86 the underwear,” said Cooper.

Quipped Ellen: “Because if it should rip, it’s much better to not have underwear on.”

Previous Post: « Hillary Clinton: ‘The NCAA is Right to Pull Games from North Carolina’ Over Anti-LGBT HB2
Next Post: Samantha Bee Returns to Election 2016 and ’Everything Is Scary Now’ – WATCH »