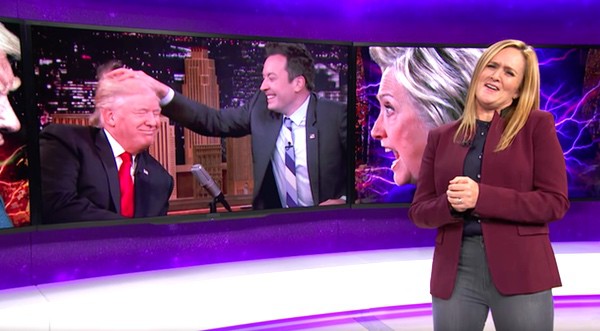 Samantha Bee took down the entertainment giants, particularly NBC, for fawning over “sexist bigot” Donald Trump as he spewed his birther theories for years.

“Americans know Trump is a sexist bigot…They just don’t care…Why do so many Americans think playing footsie with fringe hate groups isn’t a disqualifier from polite society, much less the presidency? Maybe that’s because that’s the message they get from entertainment giants like NBC which gladly nurtured Trump’s celebrity through all the years he was running around saying this.”

Bee then played a clip of Trump touting his birther theories.

Clucked Trump in the clip: “The birthers have been so badly labeled they’re afraid to bring it up. Well I brought it up and I’ve reinvigorated that issue and I’m very proud to have done it.”

Answered Bee: “Proud like your kid when he drags you into the bathroom to see his poop. By ignoring that poop NBC tacitly condoned a race-baiting demagogue.”

“You know here’s a thought,” she added. “When Holocaust survivors are telling you, ‘hey this guy gives me deja vu, maybe don’t invite him up into your house to play with your adorable children.”

In Part 2, Bee blasted Trump’s ‘Birther’ announcement and the media’s coverage of it. 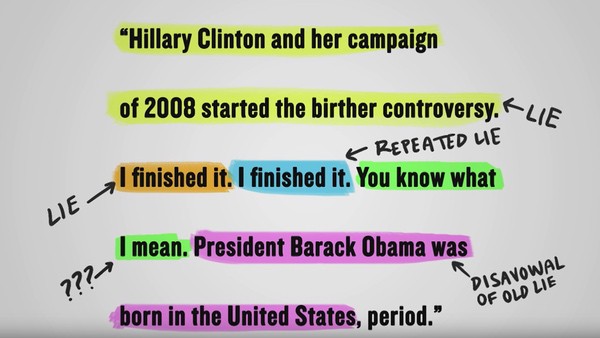 “F–k you. A decade of racist conspiracy mongering brushed up in a 32-word statement that contained two lies, plus one of those lies repeated, and the half-hearted disavowal of the original lie. Even the part where he says ‘you know what I mean’ isn’t really true because nobody knows what the f–k he’s talking about there.”

Previous Post: « ‘Passengers’ Trailer Reveals What Spending Years in Space with Chris Pratt Might Be Like: WATCH
Next Post: Nyle DiMarco Stars in ASL Ad for Hillary Clinton: ‘The Voice of Your Vote is the Greatest Voice We Have’ – WATCH »