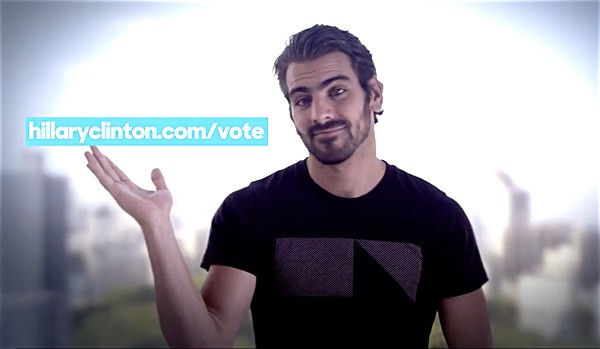 Dancing with the Stars and America’s Top Model winner Nyle DiMarco, who is deaf, recorded an ad for Hillary Clinton which Clinton tweeted this morning.

“You can leave this ad muted — there’s nothing to hear. And keep scrolling past if you want, we’re used to being ignored. But if you’re still listening to my voice, please know that there are a lot of people out there without one. Among the 50 million Americans living with a disability, many don’t have the ability to work, to travel, or to do countless other things you might take for granted.”

RELATED: Nyle DiMarco Says a Major Advantage of Being Deaf is That He Can’t Hear Donald Trump: WATCH

Adds DiMarco: “So this November, please consider voting for the only candidate with a plan to change that. Because the voice of your vote is the greatest voice we have.”

"The voice of your vote is the greatest voice we have." —@NyleDiMarcohttps://t.co/tTgeqxNqYm pic.twitter.com/X3oqEoOYsU

DiMarco, who describes his sexual orientation as “sexually fluid”, spoke at the Human Rights Campaign’s national dinner last week and joked that one major advantage he has over people who can hear is that he doesn’t have to listen to Donald Trump:

“Seriously, I don’t find not being able to hear an obstacle or a boundary. For me and for many of us, it is an advantage and it’s a part of my identity in fact. It’s a huge part of who I am. And in this very turbulent political year, trust me, don’t you want to sometimes just turn the volume off completely when Donald Trump starts to rant? I have a tremendous advantage there as well. I don’t hear a thing.”

“My passion, personally, is being my true self while inspiring young people who are struggling with their identities to love themselves for who they are. And myself, as a sexually fluid deaf man, I know that embracing all our identities is the way to thrive and to overcome the limitations and prejudices that surround us. There is no doubt in my mind that human diversity is what colors our world. For all LGBTQ Americans, we know from experience that labels can’t hold us back. We can change the world one person at a time simply by being our true selves.”