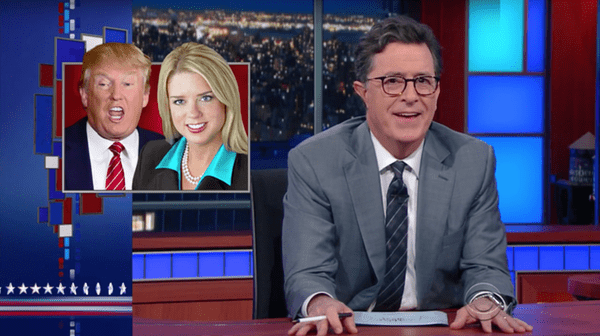 On Thursday night, Stephen Colbert took aim at Florida Attorney General Pam Bondi, or as he called her “the stepmom who can’t understand why you won’t warm up to her.”

Colbert took a look at how Bondi dropped an investigation into Trump University after the Trump Foundation donated $25,000 to a PAC affiliated with her campaign. While Colbert said that nobody can say for certain that this was quid pro quo pay-for-play, “One thing’s for sure: Pam Bondi is the only person in the world who made money from Trump University.”

Of Trump, Colbert commented, “He said, ‘Yeah I cut the check, but it’s only because I like Bondi so much. I’m not the kind of guy who expects favors in exchange for political donations.’ Which makes me wonder, then who is this guy?” Colbert then showed a video of Trump talking about donating to politicians so they will ‘kiss his ass.’