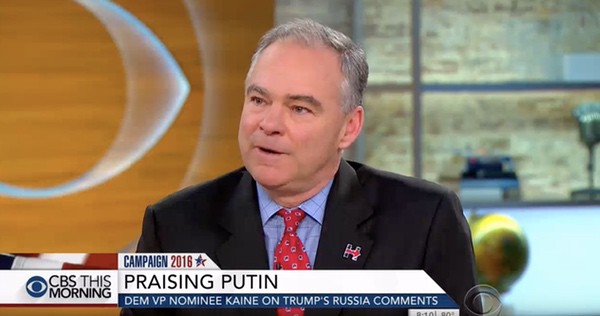 In an interview on CBS This Morning Friday, Democratic VP nominee Tim Kaine was asked about remarks made by Republican VP nominee Mike Pence about Obama’s leadership.

Said Pence: “I think it’s inarguable that Vladimir Putin has been a stronger leader in his country than Barack Obama has been in this country.”

Added Kaine: “It also demonstrates just an irrational hostility toward President Obama that I just don’t get.”

Previous Post: « Manny Pacquiao: I Made a ‘Mistake’ by Comparing Gays to Animals But I Still Believe What it Says in Leviticus
Next Post: Migaloo, a Rare All-White Humpback, Just Gave Whale-Watchers The Thrill of Their Lives: WATCH »