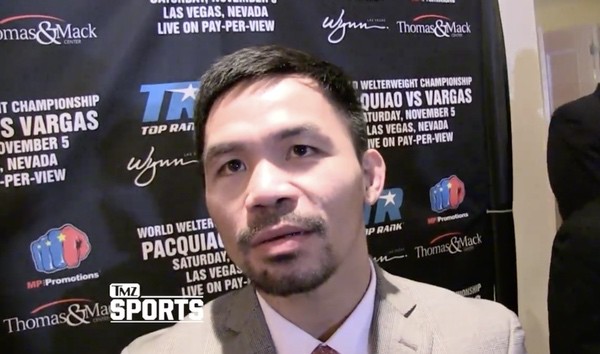 TMZ caught up with pro boxer Manny Pacquiao who was promoting a November 5 fight with Jessie Vargas in Las Vegas, and asked Pacquiao about remarks he made in February calling gay people “worse than animals.”

Pacquiao then doubled down on his bigoted hate speech, posting a passage from the Bible (Leviticus) on Instagram that calls for gays to be put to death. Pacquiao cited the same passage of scripture back in 2012 when he condemned President Obama for supporting marriage equality. That led to Pacquiao being banned from The Grove for the first time. The Grove ultimately removed that ban because they believed he had been misquoted.

Pacquiao’s remarks got him dumped by Nike and banned from The Grove shopping area in L.A.

So, does Pacquiao have any regrets about the remarks, or has he changed his mind?

Said Pacquiao to TMZ: “I’m not changing my position from what the Bible says. My mistake is just comparing [gays] to animals. I’m just human. Nobody’s perfect.”