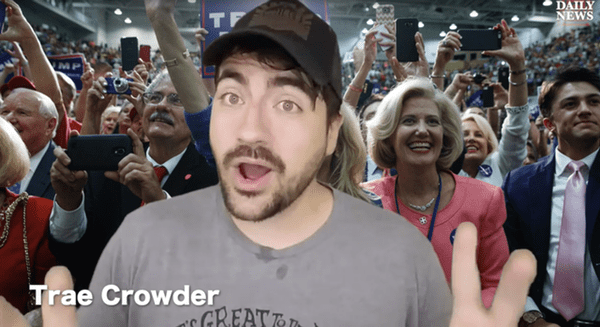 In his latest video, ‘liberal redneck’ Trae Crowder lampoons Trump supporters for being offended by Hillary Clinton’s remark that half of them are a “basket of deplorable.”

Said Crowder, “Apparently, the supporters of a campaign whose defining moments have all involved sweeping generalizations really don’t appreciate being painted with too broad of a brush…huh.”

Crowder impersonated a Trump supporter, summing up what are perhaps three crucial tenants among Trump’s base: “radical Islam is a scourge, the gay agenda is threatening America’s families, and illegal immigrants are mostly drug-dealing rapists.”

And yet if you call that agenda bigoted, Trump supporters take umbrage.

“These people are more offended than Salon.com at a mud wrestling tournament, all because the 70 year old lady they’ve been calling a crooked b-tch for 8 years said they were deplorable,” Crowder said.

As for the veracity of Hillary’s remarks, Crowder added, “Is what she said 100% accurate? OK, now, normally I’m all about facts, but this time I’m going to take a page out of their playbook and say ‘who gives a –k? They deserve it.”

And while Crowder believes that not entirely 50% of Trump’s supporters are racist, xenophobic, homophobic, and Islamophobic bigots, those who are not “need to stop acting like their guy is not the official candidate of the intolerant troglodyte because he absolutely f–king is.”

Previous Post: « ‘RuPaul’s Drag Race All Stars 2’ Goes To The Movies [Recap]
Next Post: Peter Davis Is The Most-Liked Mover Among Uptown, Downtown and Digital Shakers »