By most accounts, Hillary Clinton won the first presidential debate, which was marked by constant meltdowns from Republican nominee Donald Trump, and a lot of distracting sniffling. Watch the full debate above, if you missed it.

Nate Silver believes Clinton should get a bounce from this debate performance, and if she doesn’t then we do really need to worry about Trump winning the election:

What if Clinton doesn’t improve in the polls — or they even move toward Trump? Then that ought to be scary for Democrats, obviously. While Trump’s lack of preparation could also potentially cause him problems in the second and third debates, he showed off some of his worst qualities on Monday night, appearing to be the weaker leader than Clinton and less presidential than her, according to the CNN poll. If undecided and marginal voters were willing to shrug off Trump’s performance, then perhaps they really are in the mood for the sort of change that Trump represents, his faults be damned.

Here are a few highlights for the two of you who missed it:

Social media users wondered, is Trump ill? And many wondered, like Governor Howard Dean, if it was just a bad cocaine problem?

A meme featuring Clinton facing off against Lloyd Bridges in Airplane! went viral. 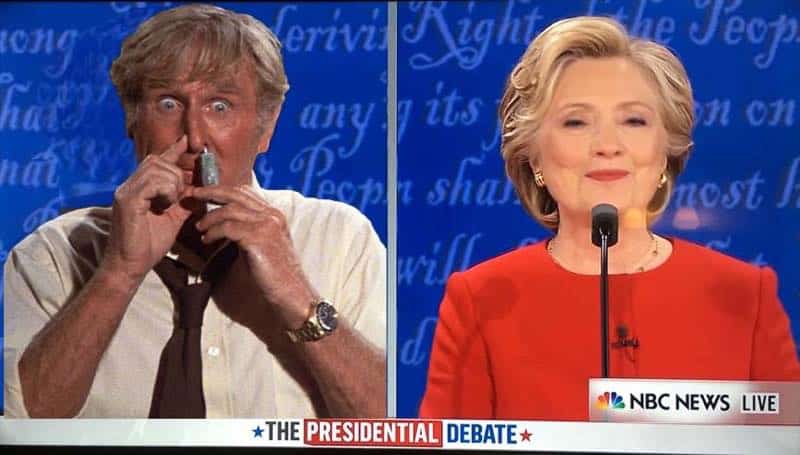 Yes, but the issues. Clinton went on the attack early, pointing out the fact that Trump got a $14 million loan from his father.

Perhaps Clinton’s best moment came when Donald Trump was asked about his taxes.

Hillary Clinton accused Donald Trump of pulling a “bait and switch” when he began talking about Clinton’s emails during a pointed question about his tax returns from Lester Holt.

For 40 years, everyone running for president has released their tax returns. You can go and see nearly, I think, 39, 40 years of our tax returns, but everyone has done it. We know the IRS has made clear there is no prohibition on releasing it when you’re under audit.

Third, we don’t know all of his business dealings, but we have been told through investigative reporting that he owes about $650 million to Wall Street and foreign banks. Or maybe he doesn’t want the American people, all of you watching tonight, to know that he’s paid nothing in federal taxes, because the only years that anybody’s ever seen were a couple of yearswhen he had to turn them over to state authorities when he was trying to get a casino license, and they showed he didn’t pay any federal income tax

What did Trump have to say to that? “That makes me smart.”

So if he’s paid zero, that means zero for troops, zero for vets, zero for schools or health. And I think probably he’s not all that enthusiastic about having the rest of our country see what the real reasons are, because it must be something really important, even terrible, that he’s trying to hide.

And the financial disclosure statements, they don’t give you the tax rate. They don’t give you all the details that tax returns would. And it just seems to me that this is something that the American people deserve to see. And I have no reason to believe that he’s ever going to release his tax returns, because there’s something he’s hiding.

And we’ll guess. We’ll keep guessing at what it might be that he’s hiding. But I think the question is, were he ever to get near the White House, what would be those conflicts? Who does he owe money to? Well, he owes you the answers to that, and he should provide them.

Trump appeared to come unhinged at several moments, particularly this exchange where he accused Clinton of “fighting ISIS your entire adult life.”

WATCH: "You're telling the enemy everything you want to do. No wonder you've been fighting ISIS your entire adult life." – Trump. #debates pic.twitter.com/vpzzNqwHe1

GMA says the top moment on Facebook was this Donald rant about his “temperament.”

The top #debate moment on Facebook? It was not Trump's sniffling, it was his comment on his temperament. https://t.co/y3u6ESnYcV

CLINTON: You know, he tried to switch from looks to stamina. But this is a man who has called women pigs, slobs and dogs, and someone who has said pregnancy is an inconvenience to employers, who has said…

TRUMP: I never said that.

CLINTON: …. women don’t deserve equal pay unless they do as good a job as men.

TRUMP: I didn’t say that.

CLINTON: And one of the worst things he said was about a woman in a beauty contest. He loves beauty contests, supporting them and hanging around them. And he called this woman “Miss Piggy.” Then he called her “Miss Housekeeping,” because she was Latina. Donald, she has a name.

CLINTON: Her name is Alicia Machado.

TRUMP: Where did you find this?

CLINTON: And she has become a U.S. citizen, and you can bet…

Completely losing it, Trump then turned to a long-ago feud with Rosie O’Donnell, perhaps the cherry on the sundae of his pathetic performance.

“You know, Hillary is hitting me with tremendous commercials. Some of it’s said in entertainment. Some of it’s said — somebody who’s been very vicious to me, Rosie O’Donnell, I said very tough things to her, and I think everybody would agree that she deserves it and nobody feels sorry for her.”

WATCH: "Rosie O'donnell, I said very tough things to her, and I think everybody would agree she deserves it." – Trump #debates pic.twitter.com/cDfBr2lpZ4

If Trump had one moment, it was when he hit Clinton on NAFTA, TPP and trade, though it was overshadowed quickly:

A few more highlights from the BBC:

What was your favorite/ least favorite debate moment?

Previous Post: « The ‘Will & Grace’ Cast Have Reunited to Take on the Presidential Election: WATCH
Next Post: Donald Trump Denies He Had Sniffles: WATCH »