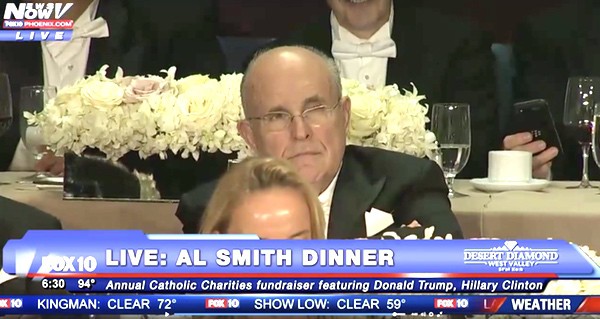 Hillary Clinton had some biting moments at the Alfred E. Smith Memorial Foundation Dinner in New York, though, unlike her opponent, they received laughs rather than boos.

The dinner is an annual white tie gala benefiting Catholic charities at which tradition dictates that presidential candidates poke fun at one another in a humorous and jovial manner during their speeches.

One particularly scathing joke launched by Clinton was aimed at Giuliani for his support of Donald Trump. You may recall that earlier this month Giuliani appeared at a Trump rally in Florida and attacked Clinton, saying she had lied when she said she was at the World Trade Center shortly after 9/11, until a photo showed up showing the two of them together.

So it was Clinton’s turn to get some payback.

Said Clinton, looking around the room:

:Many don’t know this but Rudy actually got his start as a prosecutor going after wealthy New Yorkers who avoided paying taxes. But as the saying goes, ‘if you can’t beat ’em, go on FOX News and call ’em a genius.'”

Rudy was not amused.

Previous Post: « Donald Trump Booed for Caustic ‘Jokes’ about Hillary Clinton at Al Smith Dinner: WATCH
Next Post: Gay Couple for Trump Not Worried About Death Threats Because They’ve Got a Gun: WATCH »