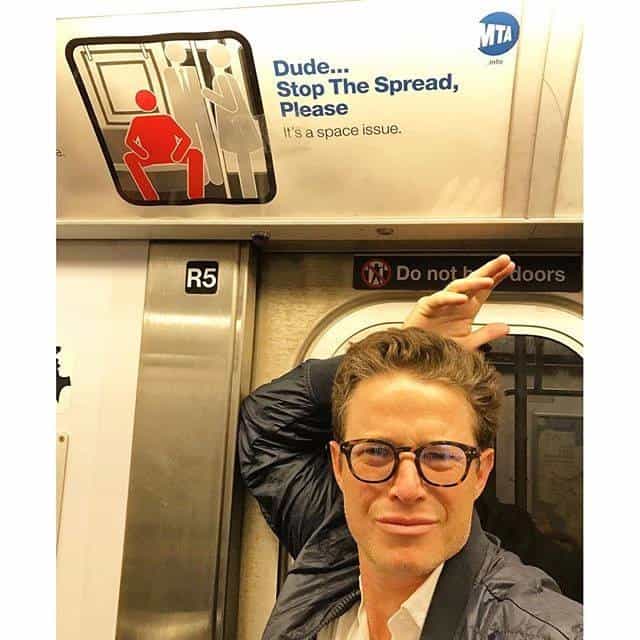 Just days before the video leak showing Donald Trump bragging with suspended Access Hollywood host Billy Bush about sexually assaulting women, Billy Bush posted to Facebook with some simple mansplaining about manspreading — the conscious or unconscious practice by some men involving the spreading of their legs on mass transit to take more than their fair share of space. (If post has been removed, we’ve got a screenshot at the bottom of the post.)

Some attribute the manspread to a biological imperative, an animal instinct driving men to strike a post suggesting they need a lot of space for their, uh bigger hands, as an advertisement of strength and standing one’s ground in order to attract sexual mates.

Of course the spread legs position doesn’t have the same power for women and more writers see it as just another extension of male privilege ingrained in society. If you have any questions, a male writer on EveryDayFeminism.com explains,

“We as men have been so inundated with the idea that all space is our space that we, often subconsciously, act as if that’s true – both in our body language and in more overt expressions of entitlement like dominating conversations, talking over other people, and harassing women on the street. “

It seems eerily of the same source as Trump’s aggressive body language in the second debate with Hillary two days after the leak, possibly a sitting version of Trump’s aggressive stage stalking. Or perhaps we didn’t know ya, Billy, and he wants you to grab his ____”. Probably not his intention.

Commenters who discovered the post are having a field day, and it’s likely not going to be up for long, so Towleroad has captured and preserved this unprompted display of natural instincts by the most important Bush in this election. Here’s to it becoming an endangered species.

It’s a show of strength which as the Daily News wrote, “is decried by female commuters as a symptom of male privilege and defended by partakers as a necessity to protect their genitalia.” And while we know there’s some insecurity about those parts in Trumpland (remember the hands), we think it’s quite clear that Billy’s quite comfortable with his privilege.

Recently, there have been backlash efforts to rehabilitate the practice, in light of widespread blogging in support of efforts to curtail the practice on public transport in New York and Seattle. Men have been increasingly posting images like Billy Bush’s but showing themselves manspreading, and the Daily News recently began it’s report on a study saying this way of sitting was biological and related to being sexually attractive:

Men have to manspread, according to two mansplaining men.

A new “science-y” report researched and written by men claims men spread out on public transit because of their bodies’ proportions — so the dude taking up three seats on the subway is acting on his biology, not his bro privilege.

What do you think? Straight white male privilege or animal magnetism? Deaf ear or latent homo? Oh you need more?

How about another post from the day after in which Bush appropriates a Rihanna lyric and calls Hoda a b–ch for taking his eyeliner? The semiotics on this one are crashing the machine. Can he do anything  that doesn’t both seem kind of gay and kind of rude?