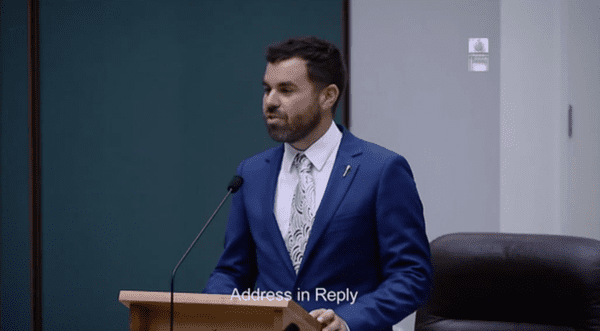 After being sworn in to the Northern Territory Parliament on Wednesday, Chansey Peach delivered a stirring speech in which he declared pride in his identity and also called for his government to treat both aboriginal and gay people with full equality and respect under the law.

“I am the nation’s first openly gay, Indigenous parliamentarian. I am eternally proud of who I am and where I come from, I own it and wear it with pride.” […]

“I stand here today humbled by the task before me, grateful for the trust the people of Namatjira has bestowed and mindful of the sacrifices made by our ancestors and elders … I dream that our people, the people from Namatjira will have the same opportunity as people living right across this land.”

“I look forward to the day when this country will recognise my rights as equal rights, when I too can marry in my country, on my country, as a recognised first Australian.”

More on Paech’s election, via BuzzFeed,

Paech was the victim of a smear campaign by supporters of opposing candidates who tried to use his sexuality against him. Paech says his detractors thought remote Aboriginal voters would be less likely to support the Arrernte and Gurindji man if they knew he was gay.

“That kind of language the electorate didn’t respond well to,’” Paech told BuzzFeed News shortly after winning the seat. “The most beautiful thing was when I was at a remote community [campaigning] and people said to me, ‘They said you were a gay and we said we didn’t care, we just want houses.’”

Paech was one of six indigenous politicians elected to the parliament this cycle.

Marriage equality has been dominating public debate in Australia as of late. A proposed gay marriage plebiscite was recently scuttled, leaving questions as to the path forward for enacting equality legislation.

You can read a full transcript of Paech’s speech, here, and watch an excerpt of it, here.