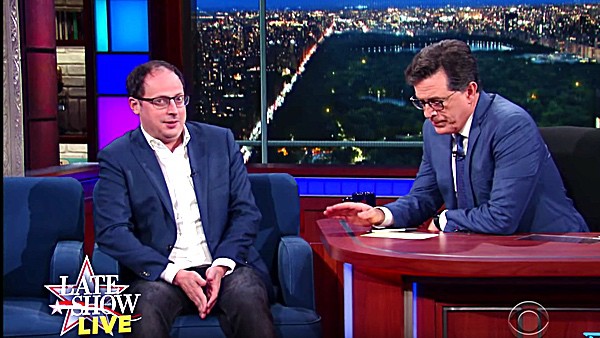 Election prognosticator Nate Silver joined Stephen Colbert on The Late Show following last night’s final debate between Donald Trump and Hillary Clinton to talk about the debate, his predictions, where things stand, and what will happen if Trump defies the electorate.

RELATED: Recap and Highlights of the Final Debate Between Hillary Clinton and Donald Trump: WATCH

Currently Silver’s site puts Clinton at an 86.2% chance of winning.

“It’s not looking too good for Donald J. Trump,” says Silver, noting that Clinton came in with a 7-point lead in the polls before the debate.

Silver and Colbert then talked about undecided voters.

Finally, Colbert asks Silver “What are the odds that this is over on November 9, because Trump says, ‘yeah, I’ll let you know.'”

Silver says odds are high that people will just tell Trump to basically f–k off.

Colbert also had his own reaction to the debate:

“Democracy’s gonna end with a cliffhanger. I guess we’re all gonna have to wait until November 9th to find out if we still have a country – if Donald Trump is in the mood for a peaceful transfer of power, or if he’s just gonna wipe his fat ass with the Constitution…”

“This was Trump’s last chance to make an impression on undecided voters, people who haven’t heard about him in the last 16 months. So…forest-dwelling hermits and crab fisherman who have been swept out to sea.”

Previous Post: « Mike Pence, Tim Kaine React to Trump’s Disqualifying Remark About Election Results: WATCH
Next Post: Australian MP Chansey Paech Declares His Pride in Moving Speech: ‘I Am Young, I Am Gay, I Am Black’ »