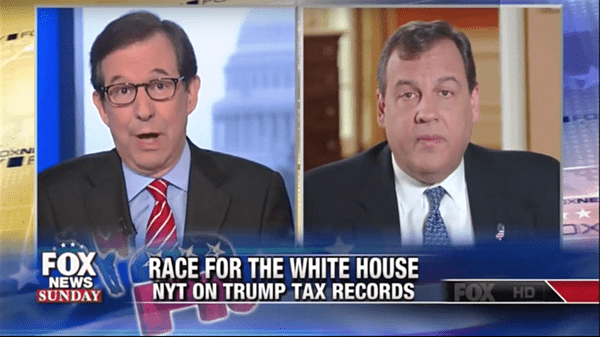 According to the Times, Donald Trump declared $916 million in losses in 1995 which meant that under current tax law he could have avoided paying federal income taxes for 18 years.

Attempting to spin the story, Christie, the beleaguered governor of New Jersey and head of Donald Trump’s presidential transition team (should he be elected), told Wallace, “This is actually a very good story for Donald Trump.”

Christie came back with, “You don’t know that he didn’t pay any federal income taxes.”

Wallace drew attention to Trump’s response to the Times’ story, which he called, a “non-denial denial,” adding, “I assume that if [Trump] had paid lots of taxes over those years he would have told us so.”

Christie responded, “That’s a big assumption on your part.”

Wallace pressed Christie again, asking, “Just to sum this up: as a top Trump advisor, as the head of his presidential transition team, your reaction to the story in the Times today is no apologies?”

Said Christie, “Oh for gosh sakes, no apologies for complying with the law.”