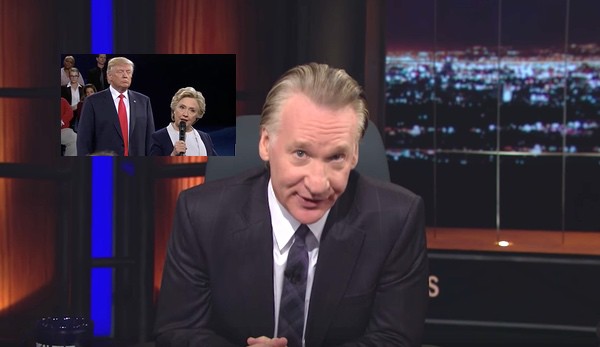 Bill Maher blasted lazy people and young voters for buying into the false equivalency of Trump and Clinton, the one path the GOP has to victory for their lying candidate.

Donald Trump is a sociopathic liar, and Hillary Clinton is not, Maher explains while playing Donald Trump’s debate denial that he mocked a disabled reporter, followed by the actual clip:

“Maybe if people could actually see Trump saying one thing a second after he claimed the opposite they’d stop pretending there was any other choice in this election than to vote for Hillary Clinton.”

Maher also points out that while all candidates are liars (Hillary lies about 27% of the time, according to Politifact) Trump is beyond:

“Trump is at 71%. His pants are a raging wildfire that cannot be contained. She lies about a quarter of the time. He’s Donald Trump so he grabs your pussy and says your pussy fell on his hand.”

Maher then brings up Colin Kaepernick, who said a choice between Clinton and Trump is between “the lesser of two evils.”

“Really, Hillary’s evil? You sound like someone on Christian TV…I am so tired of hearing ‘I know Trump’s a creep but Hillary doesn’t seem genuine.’ Grow the f**k up. She’s a civil servant not a craft beer.”

Finally, Maher turns to Millennials, from whom he always hears “ugh, they’re both bad, or ugh, they deserve each other.”

“Republicans have one path to victory in this election and it’s called false equivalency. They can’t deny Trump is horrible. It’s on tape. So they want voters to believe Hillary is just as bad, and in pursuit of that goal they have a very powerful ally: lazy people. People who like to say, ‘they’re all bad.’ Because when you say that, you don’t have to do any homework. Say they’re all the same and then you can sound justifiably jaded by the entire process when really — you just don’t know anything.“