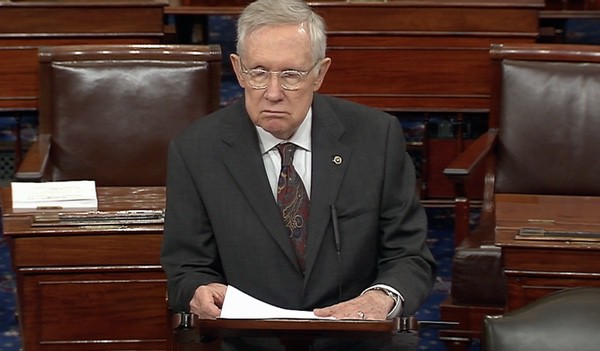 Senate Democratic Leader Harry Reid released a scathing letter to FBI Director James Comey yesterday, accusing Comey of breaking the law in releasing a provocative letter to Congress regarding emails potentially related to the Democratic candidate that he hadn’t even seen yet:

Your actions in recent months have demonstrated a disturbing double standard for the treatment of sensitive information, with what appears to be a clear intent to aid one political party over another. I am writing to inform you that my office has determined that these actions may violate the Hatch Act, which bars FBI officials from using their official authority to influence an election. Through your partisan actions, you may have broken the law.

He charged Comey with withholding information regarding Donald Trump’s ties to the Russian government:

In my communications with you and other top officials in the national security community, it has become clear that you possess explosive information about close ties and coordination between Donald Trump, his top advisors, and the Russian government – a foreign interest openly hostile to the United States, which Trump praises at every opportunity. The public has a right to know this information. I wrote to you months ago calling for this information to be released to the public. There is no danger to American interests from releasing it. And yet, you continue to resist calls to inform the public of this critical information.

And he says he was wrong to have fought for Comey’s appointment, as it now appears Comey has used his position to execute a nauseating political intervention into a US election:

The clear double-standard established by your actions strongly suggests that your highly selective approach to publicizing information, along with your timing, was intended for the success or failure of a partisan candidate or political group.

Please keep in mind that I have been a supporter of yours in the past. When Republicans filibustered your nomination and delayed your confirmation longer than any previous nominee to your position, I led the fight to get you confirmed because I believed you to be a principled public servant.

With the deepest regret, I now see that I was wrong.