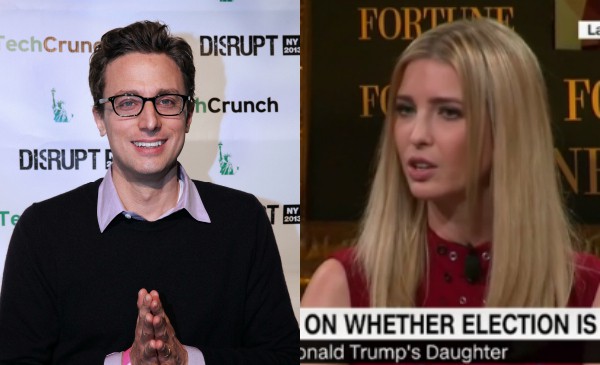 BuzzFeed CEO Jonah Peretti says he was surprised by Ivanka Trump’s reaction to her father’s infamous Access Hollywood tape because she once told Peretti that she wanted to see a “mulatto c*ck.”

Peretti quoted a tweet about Ivanka’s response and added, “Surprised Ivanka would be shocked by lewd language. I met her once & she casually said: ‘I’ve never seen a mulatto c*ck, but I’d like to.”

Surprised Ivanka would be shocked by lewd language. I met her once & she casually said: "I've never seen a mulatto cock, but I'd like to!" https://t.co/WrgCoM0MGK

The incident reportedly took place approximately 8-10 years ago in a NYC dive bar where Peretti’s wife was also present.

“She was saying how she first said she had never seen an uncircumcised c*ck and then she said, ‘I’ve never seen a mulatto c*ck. There’s lots of c*cks I’ve never seen,’ or something like that,” Peretti said.

“Of course, it was memorable just because of the use of the lewd language and racist language. It was also memorable being in the environment of being… in New York, sometimes liberal and progressive people make comments meant as jokes and not necessarily earnest. I didn’t know how to take it.”

Peretti said that, in the years since the encounter, he and his wife have discussed the alleged quote privately multiple times.

Reached by email, [Perretti’s wife Andrea] Harner told BuzzFeed News: “I was there and did hear it but have no comment beyond that.”

Peretti said he “sat” on the quote, not revealing it until now, because it was “personal.”

“I have conversations with people all the time and I never share things said in private. I only shared this because I read the article and it felt like that experience was relevant,” he said.

Ivanka has denied ever making the comments, telling BuzzFeed News, “I am not sure if this was meant to be a joke, but in case there is any ambiguity, this is a complete and total lie.”