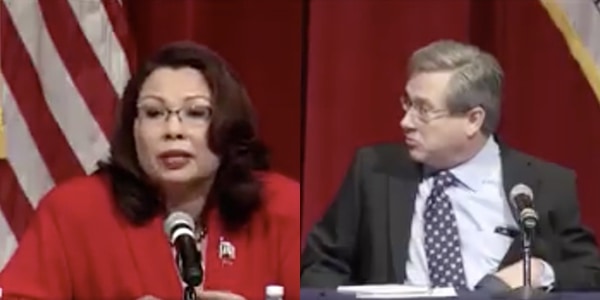 The Human Rights Campaign announced today it has voted to revoke its long-criticized endorsement of Senator Mark Kirk (R-IL) and endorse his opponent, Democrat Tammy Duckworth, following Kirk’s racist attack on Duckworth’s heritage. Duckworth’s mother is Thai and her father an American veteran descended from relatives who fought during the Revolutionary War.

Kirk’s remarks came during a debate, after Duckworth spoke about her background.

Said Duckworth, a veteran who lost both legs in the Iraq war, in the exchange:

“My family has served this nation in uniform going back to the revolution. I am a daughter of the American Revolution. I’ve bled for this nation. But I still want to be there in the Senate when the drums of war sound because people are quick to sound the drums of war and I want to be there to say this is what it costs and this is what you’re asking us to do.”

“I forgot your parents came all the way from Thailand to serve George Washington.” 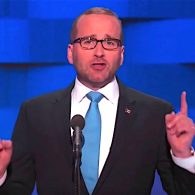 After careful consideration, HRC’s Public Policy Committee of the Board of Directors has taken the unprecedented step — a first in our 36-year history — of revoking an endorsement. We are a bipartisan organization and our staff and board make endorsement decisions based on a proven record of LGBTQ equality and a candidate’s ability to drive legislative change. We will not continue to make progress and pass the Equality Act without Republican support. It’s vitally important that we continue to build bipartisan coalitions so that we may continue to move equality forward. We endorsed the sitting Senator, Mark Kirk, because he has been a strong supporter of our cause time and again, scoring a 100 percent on HRC’s most recent Congressional Scorecard. But events this week have gone beyond the pale for our standards of leadership.

Leadership is about more than the legislation one sponsors and the votes one casts. On Thursday night, Senator Kirk’s comments about his opponent’s heritage were deeply offensive and racist. His attempt to use Congresswoman Tammy Duckworth’s race as a means to undermine her family’s American heritage and patriotism is beyond reprehensible. Yesterday, Senator Kirk tweeted an apology that failed to adequately address the real harm and magnitude of his words. So today, following a vote by our board’s committee, the Human Rights Campaign withdrew our support of Senator Kirk.

Attacking someone because of her race and ethnicity is inexcusable for anyone, but especially for a sitting U.S. Senator. The diversity of our movement is our greatest strength, and Senator Kirk’s remarks were an affront to our most fundamental values. We have therefore voted to endorse Congresswoman Tammy Duckworth, who has been a strong LGBTQ ally in the House of Representatives, and HRC will contribute the maximum amount to her campaign. We look forward to working with her in the Senate to secure full federal equality for all LGBTQ Americans.

With only ten days until the election, HRC is focused on executing the most robust get-out-the-vote effort in our history, reaching beyond our own members and supporters to pro-equality voters who have demonstrated an openness to creating a more equal and fair society. This year our community has a clear choice: between Hillary Clinton and Tim Kaine — the most robust pro-LGBTQ ticket in American history — and Donald Trump and Mike Pence — who threaten to undermine all of the progress we’ve made in the last eight years. The choice is equally clear in races at every level of government.

This year, we are going to demonstrate together that opposing LGBTQ equality is a political liability. And together, we will continue to fight for equality and deliver real, meaningful change for our country and community.

HRC has been criticized for months over its endorsement of Kirk.

Kirk has only earned a score of 78 percent out of 100 percent from HRC, while his opponent, Democratic House member Tammy Duckworth, has a score of 100 — in addition to a real shot at taking the seat and handing Democrats the Senate. David Nir, political director at Daily Kos, called the endorsement as “appalling as it is embarrassing,” and “pathetic and stupid.” Mark Joseph Stern at Slate acknowledged the “long game” HRC may be playing in backing GOPers who vote pro-gay, but nonetheless drew the line at allowing the terribly anti-gay GOP leadership to retain the Senate this year, observing that HRC “does not seem to grasp…simple reality.”

At The New Republic, Eric Sasson rightly pointed to HRC’s “serious diversity problem” per an internal report that leaked, and to the optics of backing a white male Republican with a meager score over a woman of color and a combat veteran who lost both of her legs in the Iraq war — and who has a perfect score. Chris Geidner at Buzzfeed had obtained the internal report last year, which called HRC “exclusionary,” “sexist,” and “homogenous.” This endorsement certainly lent more credence to that.

In June he flipped and said he “cannot and will not support” Trump, adding, “”Given my military experience, Donald Trump does not have the temperament to command our military or our nuclear arsenal.”

Previous Post: « Tom Daley and Dustin Lance Black Have a ‘Trump vs. Clinton’ Pumpkin Carving Contest: WATCH
Next Post: FBI’s Comey Still Has No Warrant to Search Emails, No Idea What’s in Them »