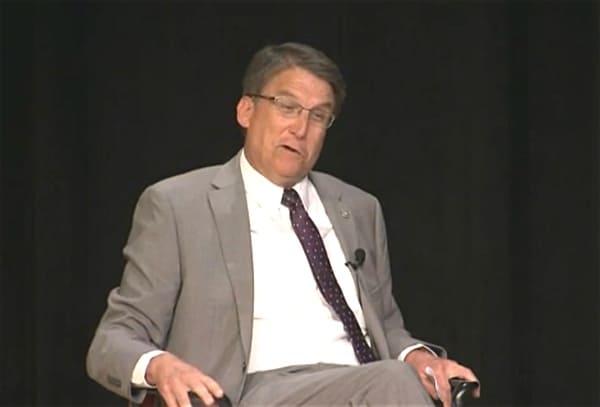 The Roanoke Times of Virginia trolled North Carolina Governor Pat McCrory big time on Friday in an editorial board letter discussing which candidate in this year’s election would do the most to help the local economy if they were elected or reelected.

Their answer? North Carolina Governor Pat McCrory, because his signing of anti-LGBT HB2 sent companies fleeing his state, many of which landed in Virginia.

We can point to specific and multiple ways he has helped the economy — our economy. North Carolina panicked and made a spectacle of itself by passing HB2, its so-called “bathroom bill.” In response, various companies and even sports leagues pulled events from the state. Three of those have wound up in Salem — the NCAA Division III men’s and women’s soccer championships, as well as the Division II Central Intercollegiate Athletic Association football championship. That’s money in the bank for us.

They also pointed out that McCrory gave Virginia a competitive advantage in economic development:

When the University Economic Development Association recently held its national conference in Roanoke, the keynote speaker highlighted a North Carolina program to encourage partnerships between colleges and companies, as a way help recruit technology companies interested in research and development. The speaker hailed it as a model for other states to follow as they try to build a “knowledge economy.” Then the speaker noted that McCrory had cancelled it. The pro-business audience groaned.

On Monday, a data company picked Richmond as the site for a new office, with 730 jobs. Industry officials said it beat out Charlotte specifically because of HB2.

For that reason, the Times editorial board says, their local economy would be best served by reelecting McCrory.