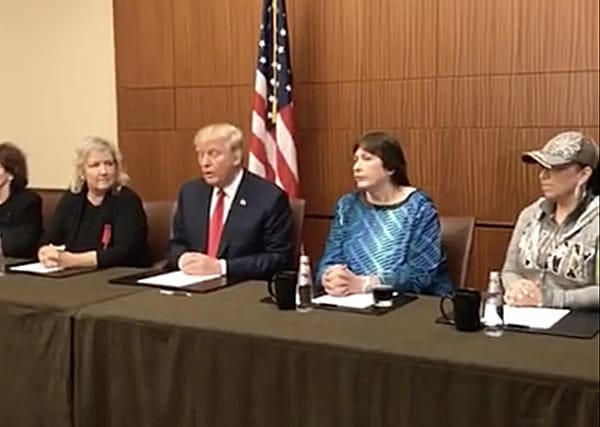 Three Bill Clinton accusers – Paula Jones, Kathleen Willey, Kathy Shelton – and Hillary accuser Kathy Shelton almost sat in Donald Trump’s private box at the debate but were told at the last minute by officials that they would be removed, the Washington Post reports:

The campaign’s plan, which was closely held and unknown to several of Trump’s top aides, was thwarted just minutes before it could be executed when officials with the Commission on Presidential Debates intervened. The commission officials warned that, if the Trump campaign tried to seat the accusers in the elevated family box, security officers would remove the women, according to the people involved, who spoke on the condition of anonymity because the discussions were confidential.

The gambit to give Bill Clinton’s accusers prime seats was devised by Trump campaign chief executive Stephen K. Bannon and Jared Kushner, the candidate’s son-in-law, and approved personally by Trump. The four women — three of whom have alleged Bill Clinton sexually assaulted or harassed them years ago — were to walk in the debate hall at the same time as the 42nd president and confront him in front of a national television audience

The four women were part of a press conference pulled together by Trump less than 90 minutes before the debate in an effort to intimidate Hillary Clinton.