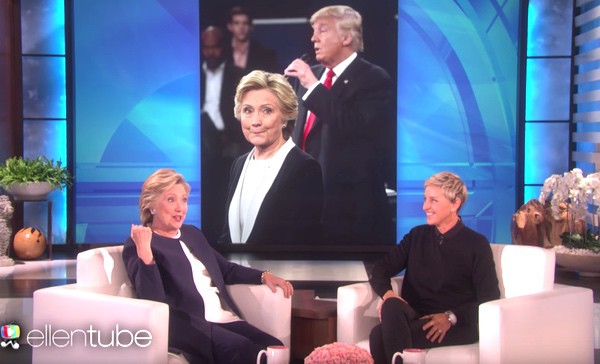 Hillary Clinton sat down with Ellen DeGeneres for her first interview since Sunday night’s insane debate with Donald Trump.

First up for discussion was Clinton’s now-famous shimmy:

“I knew that I said ‘wooo’ but I didn’t know I did the little shimmy to go along with it. And then afterwards I saw it and now people are always saying to me ‘do the shimmy, do the shimmy.'”

She also talked about her pneumonia (“my advice is, if you have pneumonia, stop for a while.”) and then got into the creepy body language Trump displayed at the debate:

“It was clear that my opponent Donald Trump was going to try to dominate the space almost to the exclusion of the people who were sitting there. They were sitting there so we could talk to them…and because of the revelation of the public video and everything that came out on Access Hollywood, he was really all wrought up and you could just sense how much anger he had, and so he was trying to dominate and then literally stalk me around the stage, and I would just feel this presence behind me. I thought, ‘whoa, this is really weird.'”

She also talked about trying to deal with “the string of accusations that he was putting forth.”

And finally, the Clinton dance-off with Ken Bone you might have missed: