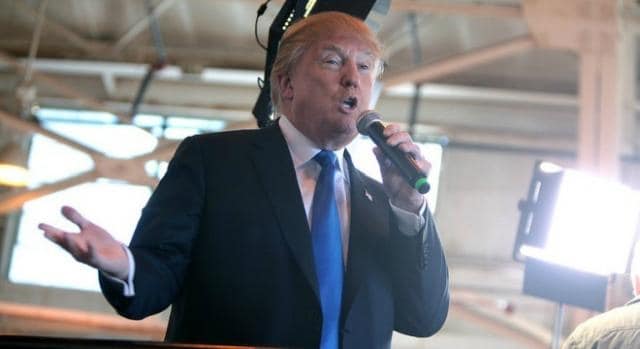 TOWLEROAD EXCLUSIVE: So he thought about it. Donald Trump almost commented on Bill Clinton’s infidelities in his first debate against Hillary Clinton, but said he refrained from doing so because Chelsea was in the audience. “Everything I wanted to say I got out, except for the transgressions of Bill,” Trump offered after the debate. “I’m very happy that I was able to hold back on the indiscretions with respect to Bill Clinton because I have a lot of respect for Chelsea Clinton, and I just didn’t want to say what I was going to say.”

But while Trump was being so gracious toward Chelsea, you’ll notice, he was also scrupulously making sure he wouldn’t hold up an unflattering mirror to his own orange-tinted skin. And, boy, does he have some blemishes to hide – especially for a belle who can’t get to the ball without the good favor of the conservative set, with their famous displays of moral rectitude. Listen up, Hillary! Here are some slings and arrows you should be launching at your jowly rival every chance you get!

I got to hear, first hand, his gloating … reveries about the bevies of women who were routinely calling his office to ask him out.

As Trump increasingly basks in the embrace of the religious right, where is their outrage over the period when The Donald was married to Ivana, with whom he has three children – and was having an affair with Marla Maples? As the People magazine reporter who taped Trump posing as his own publicist, the so-called “John Miller,” I got to hear, first hand, his gloating – I think we can even say braggadocious – reveries about the bevies of women who were routinely calling his office to ask him out.

He named names too. Carla Bruni was one of them, he (or Miller) told me. “Carla is a very beautiful girl,” he allowed. “I saw her once quickly and she’s beautiful and all, but I think that he’s got a whole open field really. A lot of the people that you write about, and you people do a great job, by the way, but a lot of the people that you write about really are — I mean, they call. They just call. Actresses, people that you write about just call to see if they can go out with him and things.” He went on to say that Kim Basinger and Madonna had phoned him, just beggin’ for a date with the hunky (in his estimate, I assume, not mine) real estate “mogul” (his term not mine).

This was at a time when he was freshly divorced from Ivana, but supposedly in a committed relationship with Marla Maples. Although that too – like everything in his Trumpocentric universe – was apparently open to negotiation. Trump had recently given Marla a rock, and she confirmed to me that it was an engagement ring – but when I asked Trump (er, Miller) if it was really OK to be playing “the whole open field” when he’d just gotten engaged, I was treated to the weirdly rubbery nature of ‘facts’ in Trumpland. “It was never an engagement ring,” he assured me. “This was a way of giving Tiffany some business, in addition to getting Ivan— getting Marla something that would be nice.”

the thrice-wed lothario he seems to measure marital success by quantity not quality, and seems to think that mistresses count for extra credit,

I bet Ivana, or Marla, or whatever her name is, would have thought a little bit of truth would be nice. I hope the American people will wake up and decide that, for them too, a little bit of truth might be nice. Or better than nice; after all, this is the election we’re talking about. This is four years as the president of the United States, we’re talking about; four years as commander in chief of an army and an arsenal just a smidge too big to be at the disposal of a thin-skinned, easily flustered playground bully.

That should matter to all of us. But for “values voters,” for Evangelicals, for Christian conservatives, for the soi-disant Moral Majority, who fervently profess that their lives and their political choices are guided by faith and conservative values, Trumps rubbery relationship with the truth should be especially crucial. And his utter contempt for marriage should matter.

“He believes strongly in the marriage concept,” Trump/Miller told me. If that was the only thing Trump ever said – or did – it should indeed fan the hopes of the newly-infatuated religious right. But since the thrice-wed lothario he seems to measure marital success by quantity not quality, and seems to think that mistresses count for extra credit, it is painfully clear that Trump doesn’t have quite the same “marriage concept” in mind as Christian voters do.

That’s why it’s time for Hillary to grab hold of the sensitive topic of marital infidelities, turn it right around, and shine the spotlight on him. On the night of October 9, voters who profess to care about marriage need to see Trump in the full, glaring light of what he has really said and really done. Even if Ivanka is in the room.

Sue Carswell is an author and on staff at Vanity Fair. The opinions expressed are not meant to represent the opinions of any other entity.