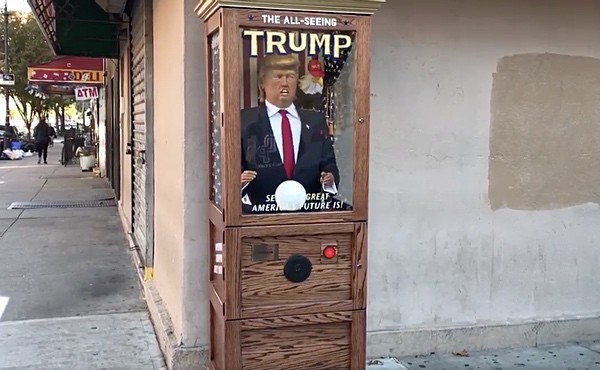 A talking Trump Zoltar machine (think the movie Big) appeared on a street in Greenpoint, Brooklyn before being whisked away to other locations, including Trump Tower, and it is spewing ugly prophecies, according to Gothamist.

“Look into my crystal ball and see America’s future,” the ‘All Seeing Trump’ declares. “I see a huge investment into a modern, high speed rail system. Very advanced, very fast. And we’re going to use it to deport 11 million illegal Mexicans. And by the way, I love the Mexican people. I love their spirit! I love their spirit. And I love packing them onto trains like cattle. And I build the best deportation trains, believe me. My trains are so much better…”

[Reporter Camille] Dodero says the Trump machine was packed into a van and driven away shortly after the above video was taken. Where will Trump Zoltar appear next?

The stunt is apparently connected to a website called All-Seeing Trump.

Check out some of the videos of the thing:

There's a custom Ask Zoltar out front—should I tell it I want to be bigly…? pic.twitter.com/KtDOvPiMhK